KATHMANDU, Oct. 11 (Xinhua) -- Forming thousands of jigsaw pieces into a picture might be a headache for many, but what Chinese restorer Zhou Jianguo and his team face in Nepal is far more challenging -- numerous pieces of debris from a world cultural heritage site that was damaged in a 7.9-magnitude earthquake. 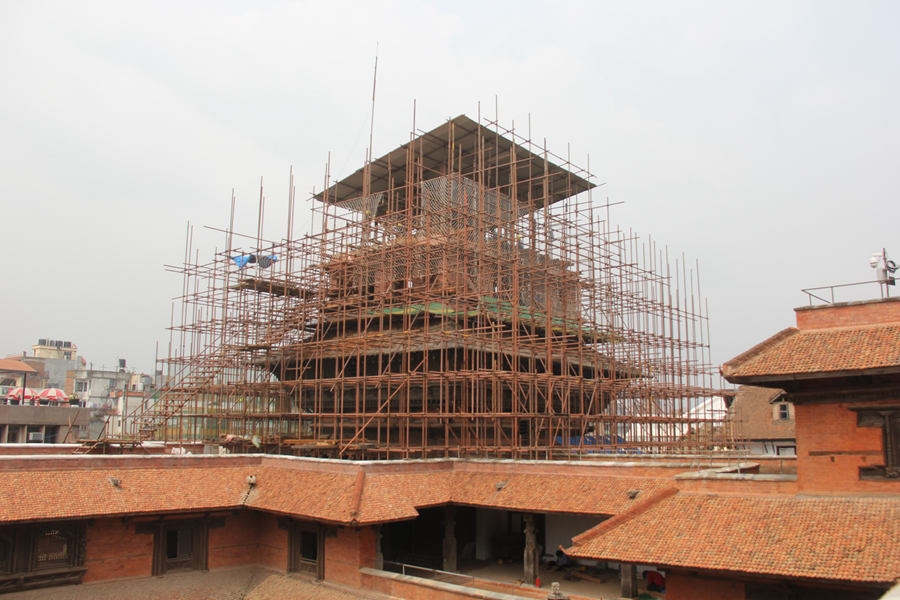 The devastating earthquake jolted Kathmandu Valley in 2015, the heart of Nepal's world cultural heritage sites, causing great damage to the historical building complexes, including the finest temples and towers in the renowned Kathmandu Durbar Square.

The veteran Chinese team dispatched to Nepal in 2017 is closely working with their Nepali colleagues, trying to recover the body and soul of the world heritage site around the clock.

The Kathmandu Durbar Square, an ancient royal courtyard built in the 17th and 18th centuries, was inscribed in the United Nations Educational, Scientific and Cultural Organization (UNESCO)'s World Cultural Heritage List in 1979.

The square consists of several royal palaces and temples, among which the nine-storeyed Basantapur temple complex is of top historical and artistic value.

The earthquake caused serious damage to the nine-storeyed Basantapur complex, including the top three floors of the Basantapur Tower in the southwest corner of the complex and parts on the sixth floor of the Bhaktapur Tower in the northeast corner of the complex. Some 80 percent of the walls suffered varying degrees of deformation and cracking due to the tremors, and numerous wooden components were damaged and scattered.

After the earthquake, at the request of the Nepali government, the Chinese government shouldered the project in 2017 to restore the complex. Zhou and his team with expertise in restoring historical Tibetan buildings from the Chinese Academy of Cultural Heritage (CACH) thereupon arrived in Kathmandu.

Zhou is the technical chief of the Chinese restoration team. He recalled the scenario of the complex after the earthquake. "It has been two years that we have been here ... The only protection of the heritage was the plastic sheet covering the complex."

"The entire heritage was seriously damaged ... and we have to take immediate precautionary measures to stabilize the buildings to keep them from secondary damage," Zhou said.

It took them almost half a year to eliminate potential risks in the crippled complex. "And then we started to collect the wooden structures and sculptures in the debris," said Zhou.

Due to chaos after the quake and the density of the historical buildings, the collection work also posed a great challenge for the Chinese team, as some fallen sculptures were taken away by locals and some had been wrongly collected as parts of other buildings.

Zhou and his colleagues numbered the collected structures and sculptures and managed to rebuild the collapsed storeys with the original pieces in another place, according to limited references provided by the Nepali side and local religious customs. If the rebuilding is successful, they will dismantle the "lego," transfer them to the square and construct the storeys on the relics.

"For the Nepali workers, they have seldom handled such huge structures before. We have to instruct them right on the spot," said Chinese restorer Xiong Jianglao.

"We sometimes need to try more than 20 times to find the correct angle to fix the structure. Only when every connection is accurate, can the collapsed storey be rebuilt authentically," Xiong said.

After more than two years of tedious and challenging work, three of the four damaged towers of the temple have been reconstructed, with the last one being underway.

Learning from Each Other

The Basantapur complex amazes people with its exquisite and sophisticated wooden sculptures. "To restore or make a copy of them is the most challenging task, as the ways Nepali ancestors followed are totally different from the Chinese (ways)," Zhou said.

"Upon carving, Chinese people will first make a design to follow, but for Nepalese, they can directly carve the Buddha, gods and other animals and monsters in different shapes according to their religion. All the designs have been carved in their minds," Zhou said.

Sanu Kaji Shakya from the village of Bungmati has worked in the restoration project for the last 18 months. "I feel proud that I could help in the reconstruction of this nine-storey building. I have an experience of 20 years in carving. I learned it from the older generations: fathers and brothers and seniors."

Shakya and his fellows are tasked with fixing the damaged sculptures and statues with original materials, and making new ones to replace the lost ones. A small wooden pillar needs two days to complete, while a piece of a delicate god statue may take them one week or longer.

As a joint venture, the Chinese and Nepali sides sometimes have different ideas and principles. The Chinese team insists on the principle of "minimum intervention," but the Nepali side wants brand-new replacements.

"From the beginning, our Nepali counterparts didn't agree with our thoughts of repairing the old," said Zhou, adding that the Nepali side gradually accepted the Chinese principles of restoring heritage pieces by "rebuilding the soul of the relics."

"Restoring the temple is a journey of learning from each other," said Guo Qianru, a CACH member working on the Basantapur complex project. "We shared our experiences and management with the Nepali side, and they also taught us about Nepali culture, religion and their traditional crafts. It is an exchange between different civilizations."

Zhou said the restoration project will contribute to maintaining Nepal's history and culture. "We are trying to restore the heritage and make it stronger than before, so that it can survive longer."

"We met difficulties during the work due to lack of detailed references about the heritage, but we have drawn pictures and made specific records for our restoration regarding the methods and crafts. We will provide the record to the Nepali side in case they need to maintain the heritage," Zhou said.

The Chinese team is also planning to establish a digital museum about the sculptures in the temple, said Guo.

It is worth making a digital collection because "sculptures of the nine-storeyed Basantapur complex are among the best," Guo said.

"For years, there were no chances for the craftsmen to exercise their skills, and the traditional market is shrinking as many of the craftsmen now work as tour guides or vendors in the tourism sites," Guo said.

"But with the project, many craftsmen have taken up their former occupations to save their culture. It is also a cultural inheritance for the locals, as the more they practice, the more skills can be taught to the next generations," Guo said.

The hilly country of Nepal is known for its exotic and mysterious Himalayan culture and ancient heritages of Buddhism and Hinduism, attracting numerous visitors from the rest of the world to the nation for "soul purifying" journeys.

The Chinese restorers have said they hope to help revive the allure of Nepal.