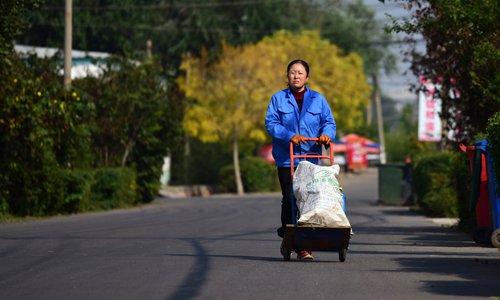 Yuan Yinghui carries a bag of refuse to sell to a recycler in a village in Chengyang, Qingdao, Shandong Province on September 29. (Photo: VCG)

Yuan Yinghui, a rubbish picker, is happy because an English language school recently became her sponsor, providing her with a laptop and free online English lessons.

The 44-year-old recently went viral on the Chinese short video app Douyin because of her passion for translating English books into Chinese.

Netizens were amazed by her strong spirit that pushed her to independently study English for over 20 years.

When she went to vocational school, she was disappointed to find there were no English courses, and quit when she was 17.

For the sake of learning English, she has run away from home and tried different jobs to earn a living on her own. Her family and local villagers did not understand or support her efforts. After working as a dishwasher, a waitress and a worker in a brickyard, she realized she could not give up studying English. In order to create more time for translating English novels into Chinese, she began to collect rubbish and sell it to recyclers in May 2016.

"I admire the family environment of the ladies in the novel of Good Little Girls," Yuan said in an excited voice, which she uses when talking about every English novel she has read.

In 2017, she spent five months finishing translating The Lost, a crime novel written by British novelist Robert Cray. She translated the work from English to Chinese by hand, writing tens of thousands characters using six notebooks. She thought the book was easy to understand and translate.

Yuan, who lives in a village, said there used to be no internet or computers to help her to study English. As a result, she had to learn the foreign language on her own.

A tape recorder was the only tool that she could use at that age. She used it to practice imitating an English accent on a learning tape. She did this for three years, but says her oral English is very poor now.

One time, the tape recorder broke down. She rushed to fix it and had a car accident on her way to the repair shop.

Yuan didn't earn much money in the 1990s, but she spent a lot on English learning. "I read the textbooks from Family Album USA and New Concept English multiple times," she said, adding they were not cheap at that time.

Yuan tried many different jobs, but she found her love for English often interfered.

Her last employer pointed out that she devoted too much time to English learning, and fired her.

As a result, Yuan decided to collect rubbish and sell it for money starting in May 2016, earning about 100 yuan ($14) every month. She scrimped and saved to buy English books and magazines on this tight budget.

Last year, her village gave her a holiday gift of 300 yuan, which she used as a deposit at the local library. There, she could read English books and magazines for free.

For a woman like Yuan who comes out of a rural village in China, reading too much is not good, said her father. Even at present, the traditional belief that "innocence is a virtue for women" is prevalent in the country's rural areas.

"Men proposed marriage to me when I was 20," Yuan told the Global Times, "but they thought I was putting on airs while I was reading English books."

She added her father opposed her constant reading and even beat her to dissuade her from the habit when she was in her 20s.

"My family always asked me why I am so different from others," Yuan said, adding she couldn't understand her father either.

As a result, Yuan left her home and earned a living on her own.

She hasn't got married and believes married life will leave no time for learning English.

Talking about her wish to improve her English, Yuan's classmates from middle school said she was very ambitious. 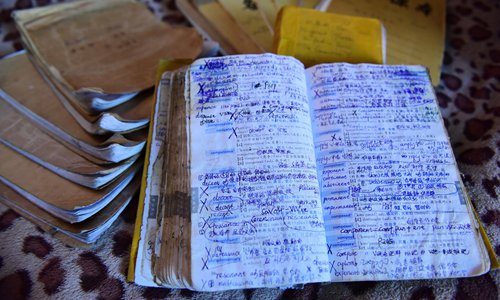 Indeed, it seems Yuan is like many women living in rural China, whose talents are cursed to remain untapped. "If I had been given access to the era of internet, I would have made some meaningful achievements," she said.

The internet is helping Yuan now. A user of the short video platform Douyin somehow encountered Yuan in the village while she was reading an English book as she picked garbage. The man filmed her and uploaded several short videos to the app, which attracted a huge amount of attention.

Most users gave Yuan positive comments. For example, one user commented, "This sister is so great! She could do some low-level translation work more than sufficiently. Translating should be her expertise."

Inspired by many netizens, Yuan told the Global Times that her favorite English motto is "Reading makes a full man," by Francis Bacon.

She wistfully wonders what her life would have been like had she been part of the internet age or born into a literary family.

However, the internet era has finally reached her. Companies and people have supported her financially to continue studying English, after media widely reported on her story.

"People have donated money to me and asked me to buy more English novels and books," she added. Some journalists mailed great English works to her as well.

A journalist once presented her work to a professional translator, who said Yuan was a novice translator at her current stage after reading her piece.

Yuan now hopes to learn more knowledge about English-to-Chinese translation from the internet. But her overall goal is conflicted. On the one hand, she hopes she could enter the professional translation industry and meet with more experts. On the other hand, she wants to live a normal life and read English in a quiet house in the countryside every day.

"I wish I could have a house in a village and raise chicken, ducks and a dog. More importantly, this life would allow me to translate English materials online," Yuan said.