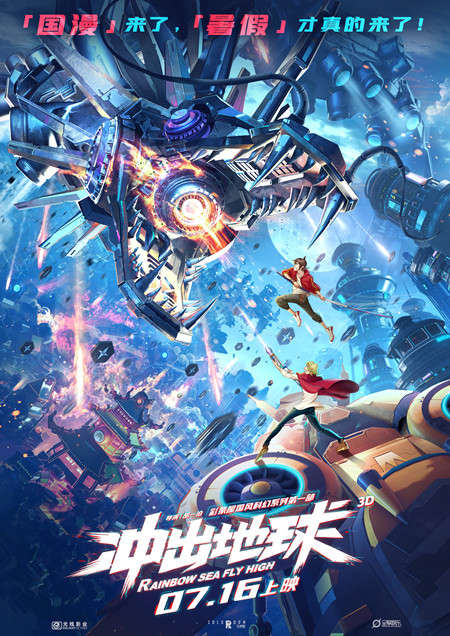 With the Chinese schools' summer vacation around the corner, the sci-fi movie Rainbow Sea Fly High announced it will open domestically on July 16, anticipating it will attract a lot of youngsters to walk into cinemas.

The upcoming film, which took six years of preparation and production, marks the latest outing of Coloroom, the animation arm of Enlight Media which is known for the blockbusters Ne Zha (2019) and Legend of Deification (2020).

Produced in the traditional 2D version, the 100-minute feature film has gathered more than 1,000 animators, with most of its action-studded scenes demanding a lot of original paintings. For instance, for a two-second-long footage featuring a catastrophic sight, the animators created 600 pieces of hand-drawn paintings.

Adapted from Rainbow Sea, a 2011 popular animated series which has earned 9.6 points out of 10 on Douban, the movie fictionalizes an epic tale to rescue the Earth at the edge of an unprecedented disaster in the far future where interstellar travel is highly developed.

So far, around 130,000 netizens have marked the movie in their most-want-to-watch list on Maoyan, one of China's largest ticketing services.