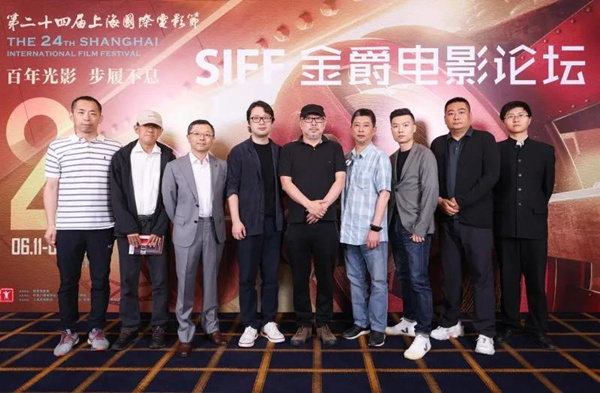 Filmmakers, experts and scholars pose for a group photo at a forum with a theme of "Reshape Imagination·Define Future-New Thinking on Chinese Science Fiction Films" during the 24th Shanghai International Film Festival (SIFF), held on June 17, 2021. (Photo courtesy of SIFF)

Wang Hongwei, vice president of the China Film Directors' Guild, and associate professor of the Director Department of the Beijing Film Academy, said that amid rapid technological development, creators must remain vigilant and cannot afford to become "lazy" about the advances being made.

"Creators should not become dependent on technology so quickly. Technology uplifts imagination, but it cannot replace imagination. We must not forget our creative mission as an artist," he said.

For more than 10 years, Wang has always believed that Chinese science fiction movies should adhere to the path of "localization." Copying the Western model might be a shortcut, but what really attracted audiences was the science fiction story itself, he said.

"Don't look for a successful foreign sci-fi movie model, and then think about how to copy it domestically, adding some Chinese elements. Instead, you should first find a good Chinese science fiction story," Wang said.

Sci-fi writer Han Song also pointed out the importance of sci-fi story creation. "Science fiction is the most groundbreaking and challenging facet of film. It often challenges your existing cognition and worldview. It is difficult to achieve this in writing, and it is even more difficult to adapt it into a movie."

At the forum, with a theme of "Reshape Imagination·Define Future—New Thinking on Chinese Science Fiction Films," filmmakers, experts and scholars from film and television circles and popular science stressed domestic sci-fi films should tell the stories of China, strengthen the exploration of localized creation, and have the courage to imagine and innovate boldly.

Dong Runnian, a science fiction writer and screenwriter of "Crazy Alien," said creators could find sci-fi is everywhere in daily life rather than focusing simply on outer space. "The technologies of this era have penetrated into all aspects of our lives," he said.

Meanwhile, experts also pointed out that many scientific details and common sense in Chinese sci-fi films were not correct and precise enough. In this regard, Gou Lijun, researcher at the National Astronomical Observatories of the Chinese Academy of Sciences and professor at the University of the Chinese Academy of Sciences, said that sci-fi movies still need to follow some basic scientific common sense and theories, requiring collaboration of creators and scientists.

Liu Hongtao, president of Mahua FunAge who is producing the upcoming sci-fi comedy "Moon Man," agreed and pointed out that, in the creation of science fiction films, scientific consultants must be involved. "Audiences will look at movies from the logic of reality and science. If there are loopholes in the movie, it will not be credible, and there will be no empathy."

His group spent a long time building a relatively complete future world view in "Moon Man," now in post-production, and making two lunar rovers. "This is not something an average traditional film prop artist can do.”

"The art department brought together consultants in the fields of materials science, mechanics, industrial design, etc. Even for the wheels, we had to consider color, texture, sense of the future, load-bearing, etc. These cannot be accomplished without the support of scientists," Liu said.

Lin Yuzhi, executive deputy director of the Science and Film Integration Special Committee of the Chinese Science Writers Association, introduced the five types of scientific consultants needed for sci-fi films, including informal consultants, providing scientific materials and scientific theories to support the plot, and even help to build an on-screen world; expert consultants working on certain science problems in the script; on-site consultants helping actors and prop makers; a scientific advisory group able to solve problems in all fields involved in a whole movie; and a cross-border scientific advisors with very professional scientific training as well as work experience in the film and television industry.

In addition to science consultants, Wang Hongwei put forward higher demands on the creative team. "Our early creative team must have basic and enough common sense, knowledge and concepts."

Science fiction writer Chen Qiufan echoed his views. "The scientific consultant provided us with a tool and weapon. Yet, if the scientific literacy and scientific concept of the creative team cannot match the weapon provided, the result will not be satisfactory."