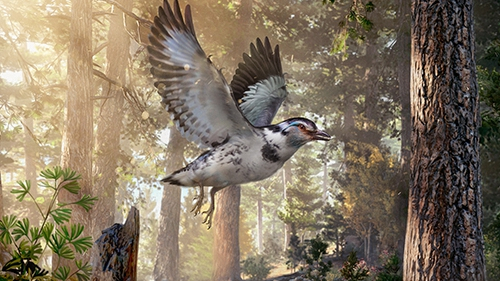 An artisit's work of the reconstruction of Jinguofortis perplexus. (Photo: CGTN / CAS)

The study published on Monday in the Proceedings of the National Academy of Sciences provided new information about avian development during the early evolution of flight.

Zhou Zhonghe, Wang Min and Thomas Stidham from the Institute of Vertebrate Paleontology and Paleoanthropology of the Chinese Academy of Sciences (CAS) described the well-preserved complete skeleton and feathers of this early bird in the study.

The analysis of this early Cretaceous fossil revealed that it was from a pivotal point in the evolution of flight: after birds lost their long bony tail, but before they evolved a fan of flight feathers on their shortened tail.

The bird has a unique combination of traits, including a jaw with small teeth like its theropod dinosaur relatives; a short bony tail ending in a compound bone called a pygostyle; gizzard stones showing that it mostly ate plants; and a third finger with only two bones, unlike other early birds, according to the study.

The fossil's shoulder joint also lent clues to its flight capacity. In flying birds, the shoulder, which experiences high stress during flight, is a tight joint between unfused bones. By contrast, Jinguofortis perplexus preserves a shoulder girdle where the major bones of the shoulder, the shoulder blade and the coracoid are fused to one another.

The existence of a fused shoulder girdle in this short-tailed fossil suggested evolutionary variety during this stage of evolution, which probably resulted in different styles of flight, according to the researchers.

Therefore, Jinguofortis perplexus probably flew a bit differently than birds do today, according to them.