Chinese scientists have recently identified a new species of a flying squirrel genus, the rarest and most wanted rodent in the world. 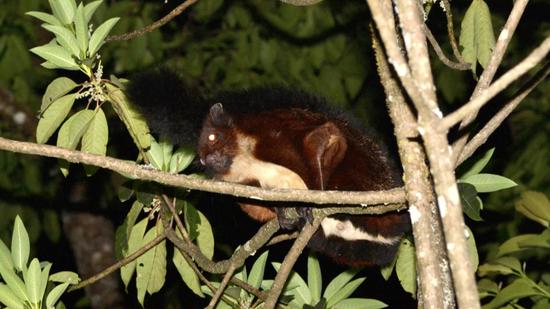 The new species of a flying squirrel genus. (Photo: Screenshot)

The study published on Thursday in the open-access journal ZooKeys described the specimen unexpectedly found in the collections of the Kunming Institute of Zoology under the Chinese Academy of Sciences.

The genus called Biswamoyopterus is regarded as the most mysterious and rarest among all flying squirrels, previously known to comprise two species in southern Asia: the Namdapha flying squirrel in India and the Laotian giant flying squirrel in Laos. Each is only known from a single specimen discovered in 1981 and 2013 respectively.

Chinese researchers collected the new specimen in Mount Gaoligong in southwest China's Yunnan Province and they initially considered it to belong to the critically endangered Namdapha flying squirrel, listed as one of the top 25 "most wanted" species in the world by the Global Wildlife Conservation.

However, the squirrel exhibited distinct features from the previously known species in the genus: a coloration and different anatomy of skull and teeth, according to the study.

Then, they conducted a new field survey and obtained another specimen. Finally, they added a third member to the enigmatic genus, referred to as the Mount Gaoligong flying squirrel.

"The new species was discovered in the blank area spanning 1,250 km between the isolated habitats of the two known species, which suggests that the genus is much more widespread than previously thought," said the paper's first author Li Quan, a member of the Kunming Institute of Zoology, in a statement.

Flying squirrels have a special membrane between their front and back legs that allows them to glide through the air between trees. It uses slight movements of the legs to steer, and the tail acts as a brake upon reaching its destination, according to the U.S. National Wildlife Federation.