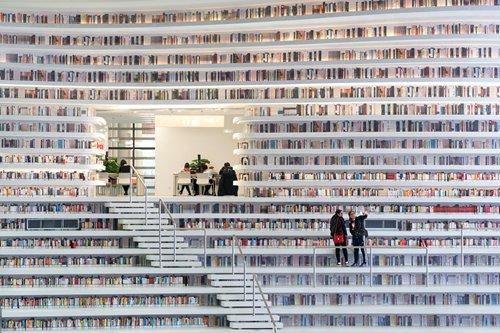 With the rapid development of technology and the internet, new methods and ecological ideas provide more possibilities for the Chinese to read.The newly released national reading report of China conducted by the Chinese Academy of Press and Publication (CAPP) shows that 80 percent of Chinese adults read books, newspapers or magazines in 2018, a year-on-year increase, extending the rising streak to six years in a row.According to Wei Yushan, head of CAPP, the growth of digital reading has made reading more popular among Chinese. About 76 percent said they had accessed content through digital channels, including online reading and reading on mobile gadgets, up from 73 percent in 2017.Chen Chengpei, an office worker in Xiamen, East China's Fujian Province, loves reading martial arts novels on his mobile phone app in his spare time. "It's so convenient to kill the spare minutes."Mobile phone reading has become the main channel for him to gain information. He has downloaded seven news apps, through which he reads for one or two hours a day.Listening to audiobooks has become a new growth point in terms of reading habits, the report shows.Zhang Jin from Beijing likes reading 40 minutes on his mobile while commuting to work on the bus in the morning, and listening to audiobooks on the way home.According to Ximalaya, a popular audio sharing platform in China, the number of audiobook users takes up 16.9 percent of its total registered users.To attract more users, the mobile app allows users to vote for the book they hope to listen to most. The audio app then organizes broadcasters and production groups to meet their needs.Li Yang, a student in Beijing, used to be plagued by piles of books as her dormitory is too small.The predicament was addressed when she started to sell the used books on an online second-hand bookstore Deja Vu. She has sold 50 books, earning more than 300 yuan ($45)."By selling them, most of my books which used to gather dust in the corner can come to life again," she said.According to a survey by e-commerce giant Alibaba in 2018, the market for  second-hand books was booming in 2018 as more Chinese tend to trade or exchange their used books online.Among the surveyed, people in Guangdong ranked first, with 1.59 second-hand books being traded or given per capita in 2018, followed by Shanghai and Beijing."When I see my books being read by others, I can feel a pleasure of sharing, which is really amazing," Li said.