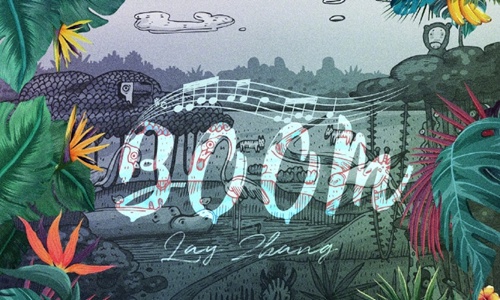 Chinese singer and K-pop EXO member Zhang Yixing, better known by his stage name Lay Zhang, released his new single "Boom," part of the second half of his fourth album Lit on Thursday. The song quickly climbed the trending ranks on both Twitter and China's Twitter-like Sina Weibo.

"My new single 'Boom' is out! I just want everyone to be happy and vibe out when they hear it! I hope to see your dance moves," Zhang posted on his official Twitter and Instagram accounts on Thursday.

"Boom" is a smooth and catchy dance song that mixes hip-hop elements and tropical sounds, and its vibrant melody is suitable to the season of summer, according to a description on a Zhang's fan club on Sina Weibo.

A video of Zhang dancing to the song has gone viral on both Twitter and Sina Weibo, with many fans imitating the dance and sharing their own videos on social media.

The first half of the album Lit was released on June 1. It sold out 30 million copies in seven minutes. EXO's members Chanyeol and Sehun performed the dance for the song "Lit" on a live broadcast Tuesday night to support Zhang's new album. Many Chinese netizens complimented the group for having a "burst soul."

Zhang once revealed that he collaborated with Grammy winner, producer, and composer Scott Storch on the last six songs of the album. Storch has collaborated with many artists including Beyoncé, DJ Khaled, 50 Cent, and Snoop Dogg, according to reports.