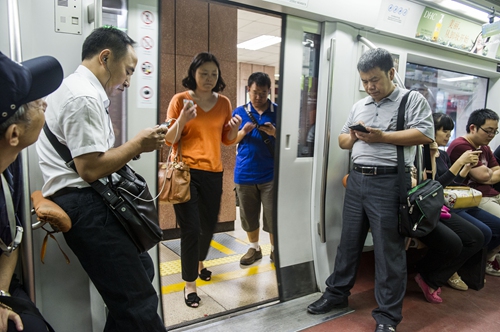 Chinese netizens have the freedom to express themselves on social media, which helps scholars conduct academic research, Chinese experts said.

Topical social issues are uploaded and discussed on Douyin, China's short video platform. "Through advanced technology, people have more and more channels to participate in the deliberation and governance of social affairs," Zhu said. He said he feels it is biased for some foreign media to criticize Chinese government for strictly supervising and monitoring the internet.

"China has cracked down on internet crimes the most aggressively in the world," he said.

China has enacted more laws in recent years than any other country in the world to protect personal information, prevent online fraud, and combat child pornography. He added that rumors threatening national security and social stability should also be controlled.

"Technically speaking, strict control over such great amount of data is impossible," he said. More than 10 million short videos are posted on Kuaishou every day. Hundreds of millions of data are uploaded to Weibo every day. "If there is such strict control as some Western media claim there is, China could not become a major source of information and data," Zhu explained.

Nine of top 20 internet corporations are Chinese. They are private companies, not state-owned enterprises. "China cannot have so many great world-level internet companies if it strictly controls its internet industry," Zhu said.

China has 647.64 million short video users as of June 2019, according to the 44th China Statistical Report on Internet Development released by China Internet Network Information Center in August 2019.

Some Chinese anthropologists even conduct academic research by using streaming platforms such as Kuaishou and Douyin, as these platforms reflect real aspects of people's lives.

Zhao Xudong, director of the Institute of anthropology in Renmin University of China, told the Global Times that the thresholds to enter the streaming platform industry are low, which provides more opportunities for rural residents and people from less educated background to directly share their real lives and opinions.

He said that normally it is difficult for a street cleaner to be noticed by the public, if so, he must be at least a model cleaner. However, streaming platforms give people a stage to easily show their lives, which helps scholars observe and understand the fast-changing development of human civilization.