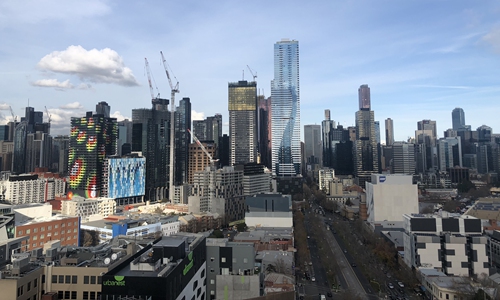 Chinese international students in Australia and their parents are left distressed and concerned for their safety after two Asian students were assaulted in an alleged racist attack on Wednesday in Melbourne’s CBD amid a rising anti-China sentiment in Australia in the wake of the coronavirus pandemic.

Chinese Consulate-General in Melbourne released a statement on Saturday, saying it attaches great importance to the incident of racial violence against international students from Asian countries that left them with injuries.

The University of Melbourne in a statement confirmed that the injured students are not Chinese nationals, adding that the university administration denounces any racist remarks and deeds. The university also urged its students to offer assistance. The police said, they are investigating the case and trying to find the perpetrators, according to the statement of the Chinese Consulate-General in Melbourne.

A video of two individuals dragging, kicking and punching two students of Asian looks while shouting “you fxxking immigrant” multiple times went viral on social media on Wednesday. A male bystander stepped in to stop the assault.

Victoria Police say the two international students were walking along Elizabeth Street at about 5.30 pm when they were assaulted. The police also released a video clip of the two perpetrators on its Twitter account to collect information to identify the two women who had launched the assault.

Melbourne Lord Mayor Sally Capp tweeted on Friday that she was “appalled” by the “disgraceful attack.”

“The violence displayed is completely unacceptable. It does not reflect the values that Melburnians stand for or the behavior we expect in our city.”

Chinese Consulate-General in Melbourne on Saturday also asked the university and police to pay extra attention to the rising racist attacks targeting Asians and ensure the safety of the Chinese international students. Any case related to Chinese students should be immediately reported to the Consulate-General, the consulate added.

The incident has drawn widespread attention on overseas and Chinese social media. International students from China in Australia and their parents reached by the Global Times said they were shocked by the racist incident and worried that more assaults targeting Chinese people or Asians would take place as there is increasing racism toward Chinese in Australia amid the pandemic.

A Chinese student surnamed Yang at the University of Queensland told the Global Times that it is absurd that the Australians in question had sunk to violence. Chinese students are worried they will be assaulted for wearing masks or other reasons.

“Anti-China news has been frequently seen on TV. We now choose to stay at home, and when I have to go outside and wear masks, I avoid white people in case anything happens,” Yang said.

A parent surnamed Liu whose child studies in Melbourne told the Global Times that Chinese parents send their children to study in Australia to realize their academic dreams, and it is heartbreaking for parents to see Chinese students harmed for no reason.

“I went to Australia twice and thought the society was civilized and tolerant, and most of its people are sincere and kind. We do hope the local government can locate and punish the perpetrators to bring a sense of safety for our children,” Liu said.

The incident also stirred discussion on Chinese social media, with many Chinese netizens criticizing that certain Australian politicians should take some responsibility for pushing anti-China sentiment in order to shift the focus away from the COVID-19 pandemic. And if Australia does not stop following the US in portraying China as having “caused the pandemic,” more racist violence may be seen in the country.

In recent weeks, Australian politicians have launched scathing attacks on China, with senior Liberal and Labor MPs saying China must “reap the economic consequences after misleading information” about the coronavirus.

The Chinese government has reiterated that China reported information about COVID-19 in a timely manner and transparently.