Chinese teenage swimmer Huang Junyi 1.42 seconds away from his dream 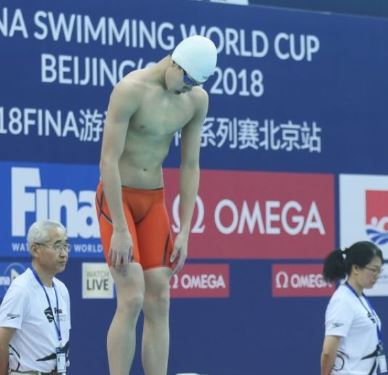 SHENYANG, May 9 (Xinhua) -- To stand on the Olympic podium is the ultimate goal of Chinese swimmer Huang Junyi. For now, a 1.42-second gap to his idol, Russian Vladimir Morozov is the impetus for the 17-year-old.

Born in Guangdong Province, Huang touched home in the men's 50m freestyle in 23.02 seconds at the National Junior Swimming Championships in Shenyang on Wednesday.

It's 1.42 seconds slower than Morozov's 21.60 at the FINA Champions Series (Guangzhou) in April, which was the world's second fastest time in 2019.

"The 1.42-second is the gap between me and my idol, also the inspiration to chase my dream," Huang said.

As the top swimmer of Guangdong team, Huang will compete in six to seven events in the national tournament, including 50m, 100m and 200m freestyle, as well as several relays.

He came third in the 50m freestyle, 0.03 seconds behind the gold winner, a result Huang is not happy with.

"My register time is 22.87. I expected to swim faster this time. I need to find my rhythm in the following competitions," Huang said.

Starting his training at six, Huang said he could not have a life without swimming.

"My mother plays basketball and my father, a basketball fan, but I like to swim. I swim everyday even when I was very young. I never give up though the training is hard. I love swimming," he added.

As young as 15, Huang made his international debut in the 2017 Asian Indoor and Martial Arts Games in Turkmenistan.

"It was such a wonderful experience to compete at an international competition and against the top swimmers in the world. I was nervous and excited. I know I has a long way to the world's best, but I enjoy the process of being better."

His personal best improved about one second after he came back from Turkmenistan.

"I believe I will beat Morozov one day. I've a lot of work to do to improve my skills and stamina. My goal is to get another one-second faster. I'm ready to come all out," Huang vowed.

"The 2024 Paris Olympics is what I'm dreaming of and I want to win a medal then."