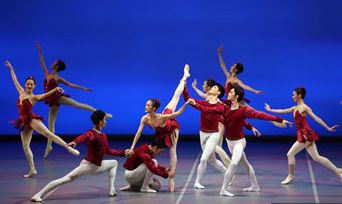 The concert performed by the Gansu Provincial Troupe of Song and Dance from northwestern China attracted more than 100 Israelis and harvested rapturous applause.

The gala event was co-hosted by the China Cultural Center in Tel Aviv and the Gansu Provincial Department of Culture and Tourism.

More than 10 well-known Chinese traditional music pieces were played by performers, with the piece of the folk music ensemble "Happy Song" as the prelude of the concert. The China Cultural Center was filled with joyful atmosphere.

The classical and bright traditional music ensemble "Blooming Flowers And Full Moon" gave the conclusion of the one-hour concert.

Dagan said it was his first time to hear Chinese music which was not familiar to him but he was deeply attracted. He expected to have more chances to hear Chinese traditional music.

When asked whether he visited China, Dagan said so far he has never been to China, but "it's just a matter of time."

Bracha Keidar, a middle-aged Israeli lady, told Xinhua that she enjoyed the performance very much. She visited southwestern China's Yunnan province in February this year.

She enjoyed China, Chinese culture and Chinese music all the time, added Keida, adding that she hoped to visit China again.

Before the performance, Israelis tasted delicious moon cakes brought by the delegation from Gansu province. They listened carefully to the traditions about the Mid-Autumn Festival told by some Chinese around them while they were tasting the moon cakes.

The Mid-Autumn Festival is celebrated every year on the 15th day of the 8th month of the Chinese lunar calendar. During the festival, people usually enjoy the sight of the full moon while eating round-shaped moon cakes.

A happy atmosphere that the Chinese Mid-Autumn Festival implies is expected to bring to Israelis through this kind of performance, said Peng Jinze, deputy director of the Division of International Affairs, the Department of Culture and Tourism of Gansu Province.

Israelis can also have the opportunity to appreciate the charms of Gansu culture and also the Chinese traditional culture, Peng told Xinhua, adding that this performance was the fifth cultural exchange event organized by the Gansu Province and held in Israel so far this year.

Gansu is active in cultural exchange activities with Israel featuring music performance, exhibitions and lectures and a total of 10 events of such kind for both sides would be held this year.