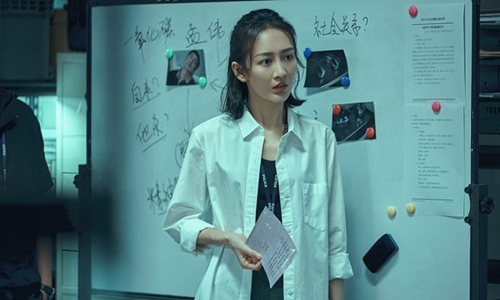 New Chinese TV drama Hunting follows an economic investigation team as they track down and capture fugitives who have fled China to avoid prosecution for economic crimes.

Made with the help of China's Ministry of Public Security, the 44-episode series has earned itself an 8.0/10 on popular Chinese media review platform Douban since debuting on April 14, filling the void for some audiences who have been longing for a drama or film focusing on the fight against economic crime.

"The boundaries of the law must not be tested or crossed," show director Liu Xin told the Global Times mentioning the core message of the series.

The series is based on the true stories of the Liehu (lit: hunting foxes) campaign, which was launched by the Ministry of Public Security in 2014.

The lead character is Xia Yuan, a brilliant criminal investigator who shifts focus from violent to economic crimes after working on a case involving his lover and friends.

Wang Bolin, boss of a large business group, gets involved in insider trading with a stock broker who runs the company where Xia's fiancée works. Before long, his fiancée is caught up in the illegal workings at the company.

Xia is torn but must fulfill his duty to fight crime. Joining the economic investigation team, he quickly adapts to this unfamiliar territory and leads his teammates in tracking down and capturing all the escaped members of Wang's group.

Liu said that the reality of economic investigation work and the international manhunt for economic fugitives was far from what he originally imagined.

"My impression of overseas pursuits mainly came from news reports, so it was more of a conceptual understanding," he noted.

"But now I know that the investigative logic involving economic crimes is far different from that of the criminal investigations which we are familiar with."

When talking with the frontline economic investigation officers during the early stages of developing the show, Liu said they heard many touching stories, which the production team tried to integrate into the drama in a natural way.

One of the officers, who travels from country to country to track down criminals every year, said he spends just a third of the year at home. One time when he was returning to China on Chinese New Year's Eve, he saw some twinkling lights outside his plane as it landed.

He realized that the lights were fireworks. He said it was at that moment did he realize he was home, because this was the only country on Earth that would be celebrating that night.

Before shooting began, lead actor Wang Kai and lead actress Wang Ou sat down with an economic investigation team in North China's Tianjin Municipality for an in-depth talk, and they collected many stories from the frontlines.

In a few days, the two leads were traveling with real officers, wearing police uniforms and having meetings, and soon they could get along well with their "colleagues" and behave just like real economic investigation officers.

The entire shoot took 123 days, of which 59 days were spent overseas in Kenya and the Czech Republic.

The main structure of the investigations on the show was based on the interviews, so as to avoid excessive dramatization that would not reflect the real characteristics and difficulties of the job.

"This work is full of restrictions and difficulties. The main reason is that the Chinese police do not have jurisdiction outside the country," Liu explained.

One of the most notable things Liu heard from a member of the Liehu campaign was that "in foreign countries, suspects and Chinese police officers are just ordinary people. In fact, we are more vulnerable than the suspects, because we are the police and we have more restrictions."

Liu expressed his gratitude to the authorities and the police on the frontlines who helped in the production of Hunting.

"During shooting, we had several on-the-job police officers to provide on-the-spot guidance. For important scenes such as a murder scene and the airport escort scene, they analyzed our setup and the actors' performances and helped us to finish production more smoothly and make the show more accurate," he said.