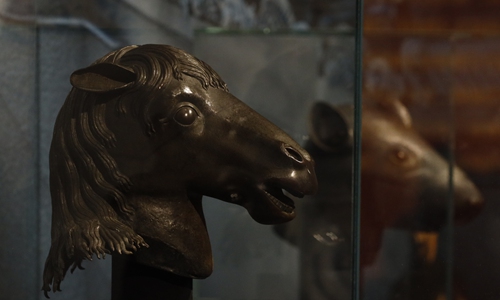 The bronze Horse zodiac head on display at the National Museum of China (Photo: Global Times)

Nearly 160 years ago, British and French troops razed Beijing's Yuanmingyuan (the Old Summer Palace) to the ground, in the process looting numerous valuable cultural relics, including the bronze heads of 12 large Chinese zodiac statues that were part of a water clock fountain.

On Wednesday, the Horse zodiac bronze head rejoined six of its compatriots - Ox, Monkey, Tiger, Pig, Rat and Rabbit - at the National Museum of China in Beijing for an exhibition of recovered looted treasures being held to celebrate the 70th anniversary of the founding of the People's Republic of China (PRC).

The Horse zodiac statue was part of a complicated water clock that stood outside the Haitang Hall of the West Building of the Yuanmingyuan Garden during the Qing Dynasty (1644-1911). The clock was an outstanding example of hydraulic engineering. In ancient China, a day was divided up into 12 two-hour periods known as a shichen. As a day progressed, each of the statues would take turns spraying water according to which shichen it represented. The Horse zodiac represented the period from 11 am to 1 pm, and at noon each day the other 11 bronze statues would join in and all spray water together for a short time.

Designed by Italian artist and missionary Giuseppe Castiglione and built during the reign of the Qianlong Emperor, the bronze statues blended Eastern and Western art styles and were an extraordinary testament to ancient Chinese art.

The Horse was made using various techniques, such as the advanced lost wax method and riveting. The Horse head is extremely vivid, with an open mouth and fine detailed hair, showing a very high level of craftsmanship. The statue was made from refined red copper, and despite being more than a century old, the Horse head has not tarnished.

The bronze heads have a turbulent history. So far, seven of the heads have made their way back to the motherland. However, the whereabouts of the five animal heads representing the zodiac signs of Dog, Rooster, Dragon, Sheep and Snake remain unknown, Guan Qiang, deputy head of China's relics authority, told the Global Times on Wednesday.

In September 2007, Macao casino tycoon Stanley Ho bought the Horse zodiac head for HK$69.1 million ($8.84 million) at an auction held by Sotheby's Hong Kong, ending the statue's more than 100-year loss overseas. After the auction, the statue was publicly displayed in the Hong Kong and Macao special administrative regions, where it played a positive role in enhancing the understanding between the two regions regarding the culture of the motherland and promoting the spirit of patriotism.

Ho decided to donate the statue to the National Museum of China collection to celebrate this year's 70th anniversary of the founding of the PRC and the 20th anniversary of Macao's return to the motherland. After the exhibition at the museum ends, the head will be put on permanent display at Yuanmingyuan.

"Seven of the 12 beasts from Yuanmingyuan are now back home [in China], but the horse is the first to return to its place of origin," said Guan.

This is actually the second bronze zodiac head that Ho has recovered. The Pig zodiac head he purchased in 2003 was donated to the Poly Art Museum in Beijing.

The bronze heads of Ox, Monkey and Tiger also reside at the Poly Art Museum after the state-owned China Poly Group Corporation spent millions to buy them at three different auctions.

The Rat and Rabbit once appeared in a French museum for a short exhibition, and were later bought by the French Pinault family, owners of the French conglomerate Kering, at an auction held by Christie's in France in 2009. The two were finally returned to China and are now part of the National Museum of China collection thanks to a donation by the Pinault family in 2013.

The gradual return of the seven bronze heads represents the long journey home of China's looted cultural relics, and spurs memories for many Chinese people.

"Cultural relics lost overseas are an inseparable part of Chinese cultural heritage, and patriotic compatriots from Hong Kong and Macao have played an important role in saving lost cultural relics over the past 70 years. Many of them have made tremendous contributions to retrieving lost looted cultural relics," said Liu Yuzhu, head of the Chinese National Cultural Heritage Administration, at the ceremony.

The hashtag for the Horse head's return got 260 million views on Sina Weibo on Thursday, with many Chinese netizens saying that Hong Kong should learn from Macao.

"Mr Ho's high sense of patriotism to rescue the lost cultural relics and return them to the motherland is a signal that says: 'Hong Kong, stop the violence and be prosperous with your motherland,'" one Chinese netizen commented on Sina Weibo.

"Today's donation from Macao is a slap in the face for Hong Kong. Shouldn't [Hong Kong tycoon] Li Ka-shing do something similar?" another Chinese netizen wrote on Sina Weibo.

"I was overwhelmed with joy while listening to the speech at the donation ceremony and saw the bronze Horse statue. I believe the remaining five statues will soon return to the motherland. I am looking forward to the exhibit of the reunion of the 12 zodiac statues," said Zhang Zexin, a 68-year-old man from Shenzhen, South China's Guangdong Province.