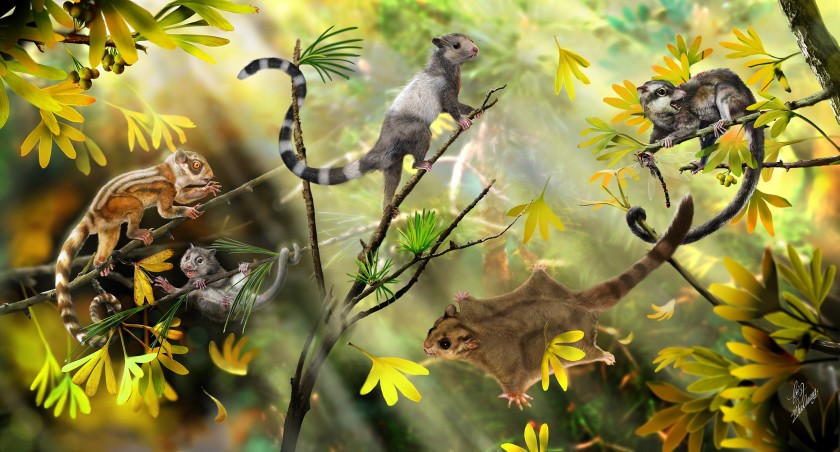 A reconstruction of arboreal mammals in a Jurassic forest. The three animals on the left represent the three new species of mammals. The other two represent two species reported earlier. (Photo: Sohu)

WASHINGTON, Dec. 5 (Xinhua) -- Scientists in China and the United States reported a mammal living more than 120 million years ago, which provides evidence for separation of hearing and chewing modules in the evolution of therian mammals to which all extant mammals, including human beings, belong to.

The study published on Thursday in the journal Science showed that the mammal living in dinosaur's age in Northeast China did not have the bone link between the auditory bones and Meckel's cartilage.

Skull morphologies, dentitions, jaws, and tooth wear from individuals of the same species show evidence of opening and closing movements during the biting and chewing process as well as jaw yawing and rolling. The multi-directional movements of the lower jaw during chewing are likely to be one of the selection pressures that caused the detachment of the auditory ossicles from the dental bone and the Meckel's cartilage, according to the study.

It signals a more advanced stage in the evolution of the mammalian middle ear, since the decoupled hearing and chewing modules eliminated physical constraints that interfered with each other and possibly increased the capacity of the two modules to evolve.

After the separation, the animal's hearing module may have had greater potential to develop sensitive hearing of high frequency sounds, and the chewing module may have been able to evolve diverse tooth morphologies and occlusal patterns that facilitated consuming different foods, according to the study.