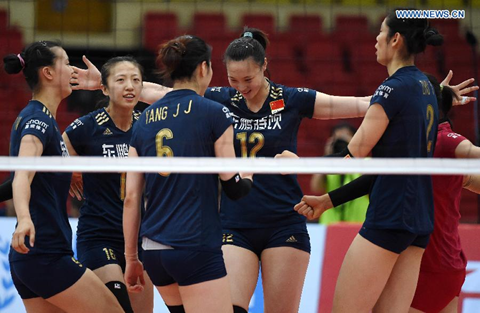 Placed in the same group as South Korea, Lang said the defending champs are again "very strong" and “any team that meets them should give their best effort in the match.”

After losses to the US, Brazil, Poland, and South Korea at this year's Volleyball Nations League, Rio Olympic gold medalists Hui Ruoqi, Wei Qiuyue, and Xu Yunli have all been replaced by young players who still have a lot to work on.

"The team is far from perfect technically and we need to improve in a lot of areas," Lang added.

Among the 16 players on the training squad, this will be a first Asian Games for captain Zhu, while Ding Xia, Zhang Changning, and Yan Ni might get their second chance to compete due to a dubious 12-player final squad.

"The World Championships are close to the Asian Games, so we are actually preparing for both. No matter who gets to go the Asian Games, we all have to give our best to prepare for it, because there is no guarantee that we will win the gold medal," said Lang.

China will face Vietnam in their opening game on August 19.