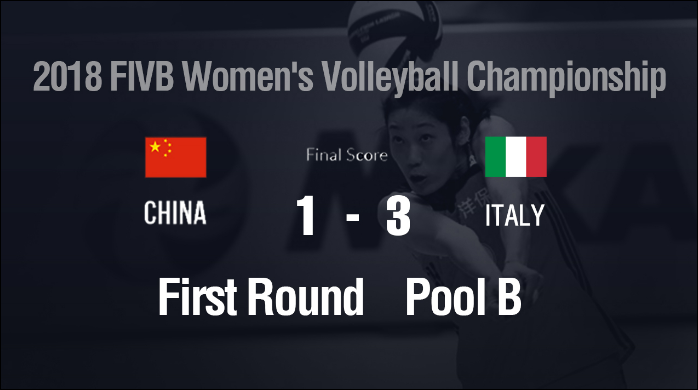 China took an early offensiveness in the first set and established a 16-13 at the second technical timeout, then won a 25-20 set due to Zhu Ting's attack, taking a 1-0 lead.

Both two sank into a seesaw in the second set with a score of 24-24, then China failed to resist Sylla's spike and save the set point owing to a missed attack. Italy clawed back onerously to a 1-1 game.

In the third set, China left behind at the first technical timeout with a four-point gap at the second. Italy then enlarged the advantage due to effective blocks and took a 25-16 win, changing the score to 2-1.

China found the offensiveness in the fourth set but still took a 15-16 score at the second technical timeout. After clawing back to a 19-19 set, China got stuck in attacking and made a turnover.  Italy seized the chance hold a 24-19 match point, and Egonu's spike ended China's hope with a score of 25-20, leading Italy a 3-1 game over China.