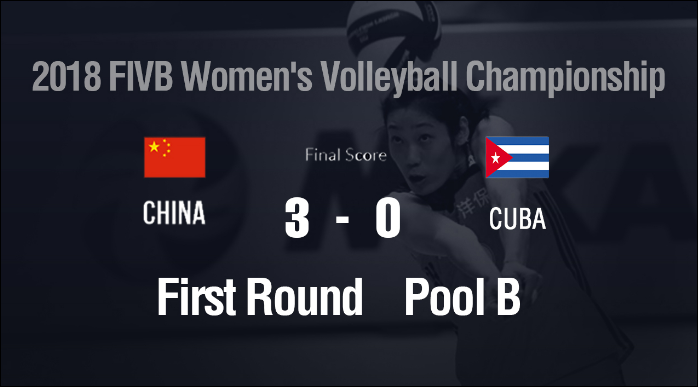 Placed in pool B, China went on the offensive in the first set with an 8-4 lead at the first technical timeout. After the break, the team continued the advantage with direct spikes, dink spikes and attacking shots, taking a 16-8 lead over Cuba during the second technical timeout.

Then with a set point 24-12, Chinese opposite spiker Zeng Chunlei made a direct kill leading to China a 1-0 game.

In the second set, China established an 8-5 lead at the first technical timeout due to a powerful attack and rigorous defense and kept the advantage to a 16 -12 set at the second timeout. After a seesaw period, China took the set point with 24 -22 but was clawed back one point by Cuba.

China maintained the attacking dominance by changing spikers to Zhu Ting and Li Yingying with an 8-4 lead at the first technical timeout in the third set. Then catching the rival's turnover, China took a 16-11 set at the second timeout.

After the break, China enlarged the advantage to 10 points with a score of 21-11, and seized the match point via Yuan Xinyue's fast attack. After being clawed back one point, China won the third set thanks to Yuan's back-flight with a total score of 3-0 win over Cuba.