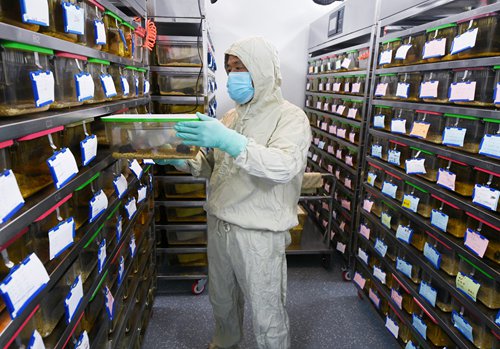 A researcher observes the progress of lab rats in a research base in Nanjing. (Photos: VCG)

Unlike COVID-19, hantavirus is not mainly transmitted through the respiratory system, but a patient's excreta and blood can be contagious, virologists said, after a Chinese worker died of the hantavirus on Monday.

The worker, surnamed Tian, planned to go back to Shandong to work along with 29 other people on a chartered bus on Monday, but began to feel unwell on the way and was sent to hospital in Ningshan county, Shannxi Province. Tian died despite treatment on Monday morning.

All the other passengers tested negative for the novel coronavirus and their test results for hantavirus are pending, Ningshan county government said on Wednesday.

It is unlikely that the patient infected his fellow passengers, even though they sat on the same bus, as infection does not usually occur between people. People are also not normally attacked by hantavirus and COVID-19 at the same time, Yang Zhanqiu, a virologist at Wuhan University, told the Global Times on Wednesday.

"Unlike the COVID-19, the hantavirus in most cases does not transmit through the respiratory system. But the human excreta and blood of an infected patient can transmit the virus to humans," Yang said.

The disease may be caused by contact with rats, eating food that they have touched, or breathing air contaminated by mouse feces. The disease is prevalent in villages from May to June and October to December, Yang said.

"There is no need to worry about the hantavirus. Hantavirus disease is preventable and controllable and there are vaccines to prevent it. Its incidence in urban cities is very low as the disease is mainly found in rural villages where rats tend to appear when people are working in the field," Yang explained.

The disease is prevalent in Eurasia, with cases of infection in Russia, Finland, Sweden, and China. The death rate from hantavirus infection in China stands between 1 percent and 10 percent while the death rate in the US is much higher, with an average of 40 percent, according to Yang.

Similar to COVID-19, the hantavirus can severely damage patients' liver, kidney and other organ functions and produce symptoms of fever and massive bleeding, Yang told the Global Times.