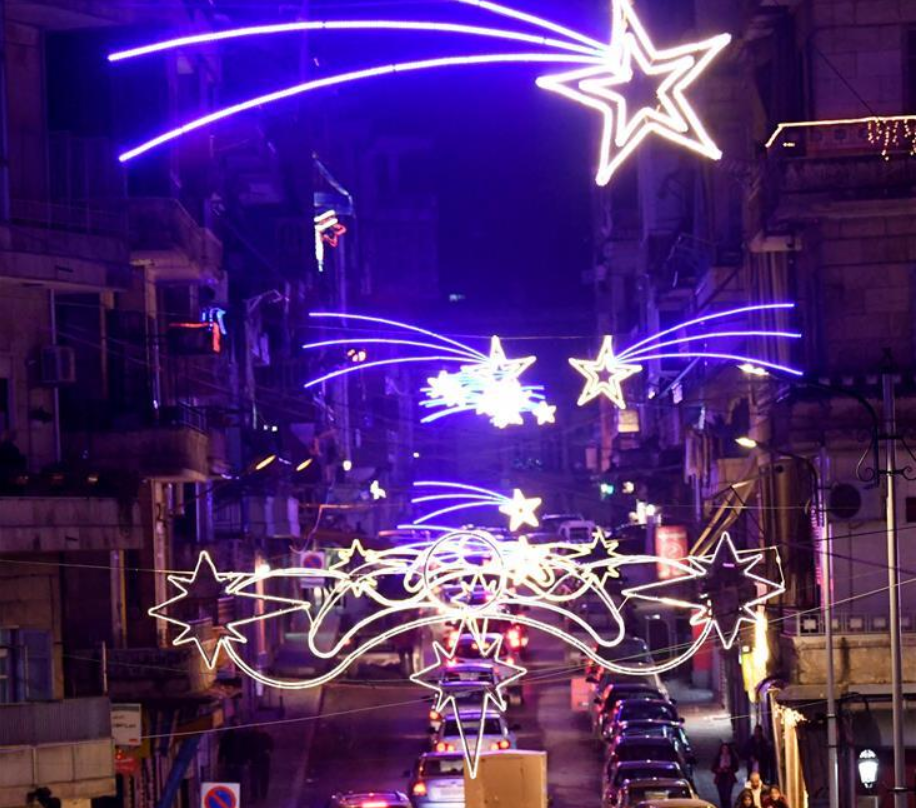 Christmas decorations are seen at the Aziziyeh Square in Aleppo, Northern Syria, on December 20, 2018. (Photo: Xinhua)

ALEPPO, Syria, Dec. 23 (Xinhua) -- At a corner in front of Aleppo's ancient citadel, a light is shining through the devastation in that old part of the city, like a magnet pulling people close to its warmth.

It's a Christmas tree with delightful decoration and colors that take the eye away from the scars of war around it to the warmth of hope and peace.

Aleppo city in northern Syria has seen a devastating war throughout years with much of its historic sites in the old city in ruins.

Two years since its liberation, the people have started gaining confidence and working to restore their lives and the lost glamor of the holiday season.

During the war, Christmas trees were shy, hiding inside the homes, not daring to send their warm lights outward out of respect and sadness for the suffering and grief of the people whose biggest dream was to stay safe with their families.

The sounds of shelling were deafening and scary enough that Christmas carols were completely out of place and unheard.

Now, the lights are bolder, more colorful and strong enough to penetrate the grayness of the war's devastation in Aleppo.

Saer Kheirallah, a restaurant owner in Aleppo, was among the first to return to his restaurant near the historical citadel of Aleppo when it was liberated from the rebels by the Syrian Army in 2016.

His restaurant had always held Christmas parties before the war, but when the rebels took control of eastern Aleppo, all the joyful atmosphere turned grayed and muted.

Kheirallah told Xinhua that he had brought assorted decorations and festooned a large Christmas tree with colorful lights to be a minaret of hope and love amid the largely destroyed part of Aleppo.

He said he wanted to remind people of how Aleppo was before the war and tell them that it will return as beautiful and even more.

"We must decorate, we must do more, we must encourage others and everybody should know that we were like this before the war and we are returning," he said.

The man said he feels happy to see people coming to his place to enjoy the Christmas decoration.

"Everyone is happy and I am so happy to see people coming to take photos near the decorations and the Christmas tree and enjoy their time. The idea is that this how we were and we will come back stronger," he said.

His place is jam-packed with people and women in full makeup, some of whom were making birthday parties. It's strange because he is basically the only restaurant near the citadel as most of his surrounding is largely damaged and people kept coming because they simply want to be happy.

For his side, Joseph Fanon, a jeweler, also chose to make a distinct and eye-catching decoration for the holiday season in the Aziziyeh Square in Aleppo, and like Kheirallah, he wanted to see his city better.

Fanon said during the war, the decoration for the holiday largely dwindled as the Aziziyeh was a target for the explosive projectiles launched by the rebels in eastern Aleppo.

Now, the man is lighting every corner of the square with star-shaped blue neons that he aligned so carefully to have them match one another if looked at from the center of the square.

He told Xinhua that the light of the Christmas tree he was decorating is to spread the love for the whole world.

"We had more decoration before the war but during the years of war, decorations have decreased. We will light up this tree and we will spread love to the whole world and send a message that this is Aleppo and Syria is the country of love," he said.

Those people and more are exerting this personal effort to see their city brighter and this is what people learned from war: they should work to have their city better with these personal touches, and the city looks much better and as young and happy as before.