CULTURE Cigarette butts pollution: How much awareness is there in China?

Cigarette butts pollution: How much awareness is there in China? 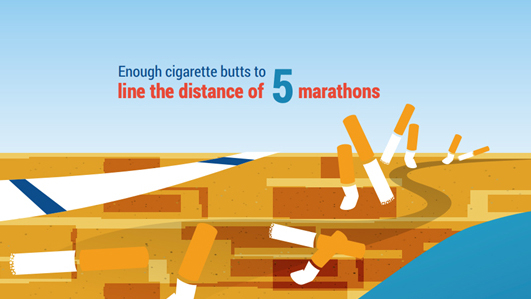 During a 2018 coastal clean-up by Ocean Conservancy, cigarette butts ranked No. 1 on its list of most littered items. More than two million pieces were collected in over 100 countries.

Many people are aware that smoking has harmful effects on health, but few actually know that the small yet ubiquitous cigarette butt is dangerous to the environment?

"I never knew cigarette butts could pollute the environment. I only know smoking does," a man told CGTN.

"I've never thought of that. I'm just always concerned that cigarette butts might burn something. I didn't know they could cause pollution," said a salesperson surnamed Liang.

"I think I watched something about (this topic) when I was a kid, but I haven't heard much about it in recent years," said Wang Xiaopu, a translator.

According to the World Health Organization's representative for China, people discard up to two-thirds of a cigarette stick after smoking. Since its filter tip is not biodegradable, cigarette butts easily accumulate and persist in the environment. Almost 200,000 tons are discarded worldwide, the impact of which is beyond cleanliness.

"More importantly, these chemicals like nicotine and heavy metals are in these discarded wastes. Then leach into the environment, and they appear in our soil, appear in our water, so the environmental impact of this small seemingly negligible waste that's left at the end of the cigarette accumulates into a significant global impact," said Dr. Gauden Galea, a WHO representative for China.

Chen Xiaowei, a sanitation worker in Beijing, said she usually picks up more than 1,000 cigarette butts each day.

"People dump lots of cigarette butts near the subway entrances or on the streets. I usually sweep them into a dustpan and step on the burning cigarette ends, then throw them into a trash can," said Chen.

Doctor Galea said the lack of awareness also exists outside of China, and it is a global issue. Aside from raising awareness, he has this advice for smokers.

"That's not something which we outsource to the government, and it's not someone else who has to do the cleaning up for us. The problem is if you continue to smoke, you are still contributing to the overall 175,000 tons of butts that are adding to the waste problem in the world. But at very least you can mitigate the impact by not exposing others and by being responsible to the discarding."

Though it sounds easy, an environment free of cigarette butts may still be difficult to achieve, yet not impossible.