One man's preservation efforts have mushroomed to encompass hundreds of volunteers and boost civic pride. 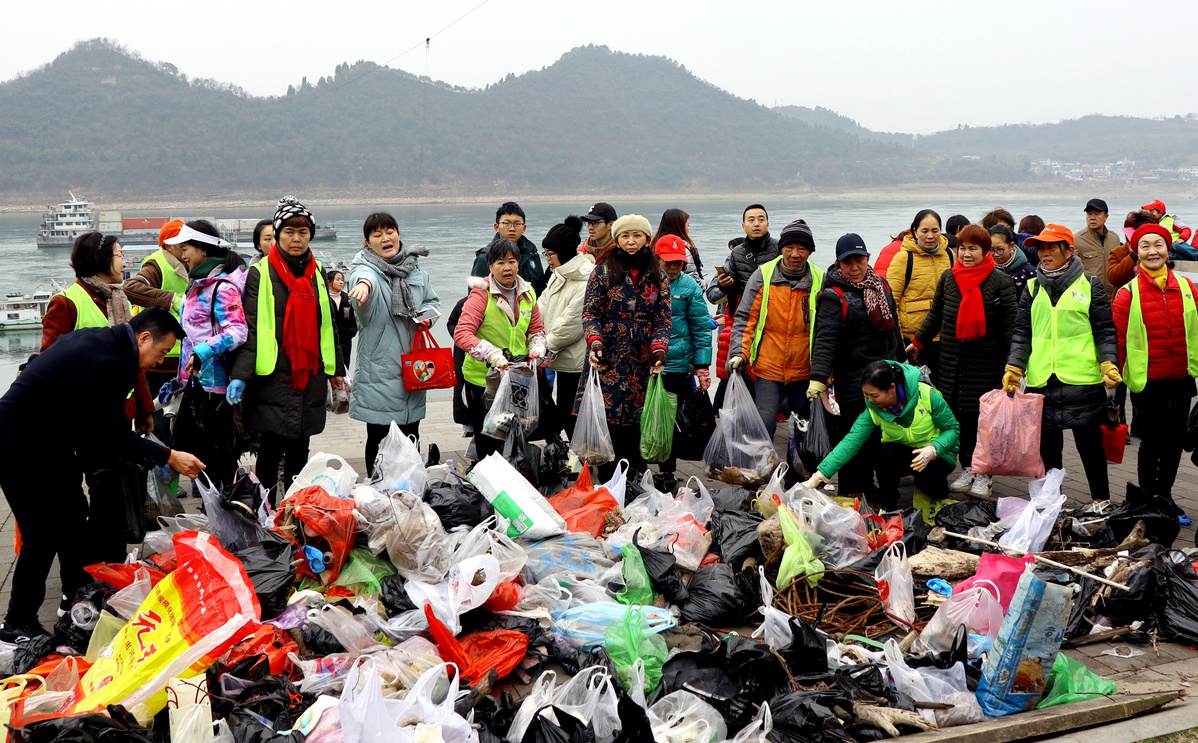 Volunteers remove garbage during an operation on the banks of the Yangtze River in Yichang, Hubei province, on the fifth day of Chinese New Year. (Photos: China Daily)

Get up at 5:30 am. Leave the house at 6 am and start collecting garbage on the banks of the Yangtze River. Finish collection at 7:30 am.

Li Nianbang, from Yichang, Hubei province, has followed this routine every weekend and national holiday for the past few years, no matter what the weather.

Wearing rubber gloves and dragging a huge bag, the 52-year-old self-employed hairdresser has encountered everything from broken bottles to cans and rags during hundreds of early morning excursions in the riverside city, which crouches in the shadow of the Three Gorges Dam, a massive flood-control and hydropower project on the Yangtze River.

Three years ago, the Hubei native founded a volunteer group called Sanxia Yigong, or the "Three Gorges Ant Workers", which refers to the hundreds of volunteers who swarm across the riverbank like ants collecting garbage.

His motive was simple: to protect the river, which has provided local residents with water for drinking, irrigation and transportation, along with acting as a boundary marker with other provinces, for thousands of years. The waterway is also home to a wide array of endemic and endangered species, including the Chinese alligator and the Yangtze River dolphin.

However, the water has been polluted by domestic sewage and industrial wastewater for decades, while residents and visitors have strewn garbage along the riverbanks.

"A single ant is limited in power, but when many ants come together they bring change beyond measure," Li said. "That is what I anticipated our group would achieve."

In the past three years, some 30,000 of these ant workers have removed more than 1,000 metric tons of garbage from the riverbanks, according to Li's estimates. Participants range across all age groups, from government officials to retirees and students. 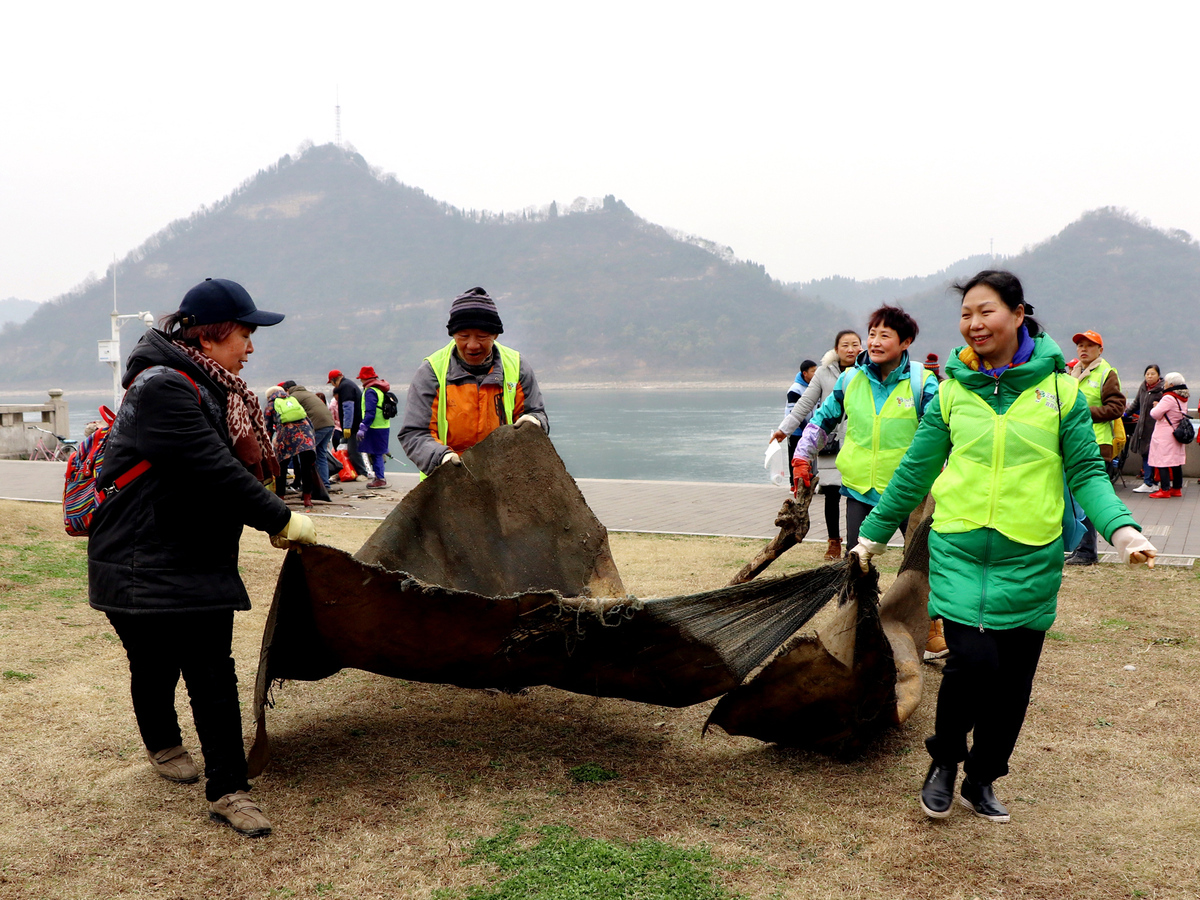 Volunteers remove garbage during an operation on the banks of the Yangtze River in Yichang, Hubei province, on the fifth day of Chinese New Year.

According to Zhou Fengying, a 62-year-old volunteer who has lived in Yichang all her life, the ant workers have made a massive difference.

"There was a time when lots of stinking rubbish would be washed onto the banks during summer. The smell was unbearable," she said.

Now, the riverbank is slowly regaining its place as a peaceful spot for urban commuters and a popular haunt for family outings and post-supper walks.

It is also increasingly common for newlywed couples to have wedding photos taken there.

The transformation started with an impulse, according to Li, who opened his barbershop in 1986.

On Dec 1, 2015, he read a news story about Tommy Kleyn, a young man in the Netherlands.

Kleyn was shocked by the sight of a heavily polluted river he passed every day as he rode his bicycle to work, so he decided to clean it up.

To achieve his aim, he decided to get up 30 minutes earlier every day and spend the extra time working on the riverbank until all the garbage had been cleared away.

Inspired by Kleyn's devotion, Li decided to follow suit and clean up the banks of the Yangtze in his area. He began his mission two days later, equipped with rubber gloves and trash bags.

At that time, he visited the riverbank every day of the week.

On the first day, he collected more than 25 kilograms of trash from the riverbank, which had long been a dumping ground for garbage. The amount doubled on the second day, and again on the third.

"I'd say those days were some of the most unforgettable of my life. To be frank, I could not sleep the night before I started because I had an inner struggle," he said, recalling his concerns about people's opinions of him and whether they would look down on him as a "waste collector".

He also had to battle the harsh weather conditions. It was December in the southern province, where the generally humid climate exacerbates the feeling of being cold on winter mornings.

"On rainy or snowy days, the wind was like a knife that cut deep into my skin," he said.

"I dared not slacken off even once, because if I had done so, I would have found a million excuses not to go the next time."

Even more hurtful, though, was the barrage of unflattering opinions and misunderstandings from friends, neighbors and even passersby who questioned his motives. Many believed he was being paid to do the work or assumed he was only conducting the cleanup campaign to gain fame.

Other people laughed at what they saw as his stupidity and stubbornness.

"They thought I would never accomplish the task, because even if I cleaned up the riverbank one day it would be littered again the next," he said.

However, the critical comments subsided as Li persisted with his task, and a growing number of people showed their support by sharing his vision of a pristine riverbank. 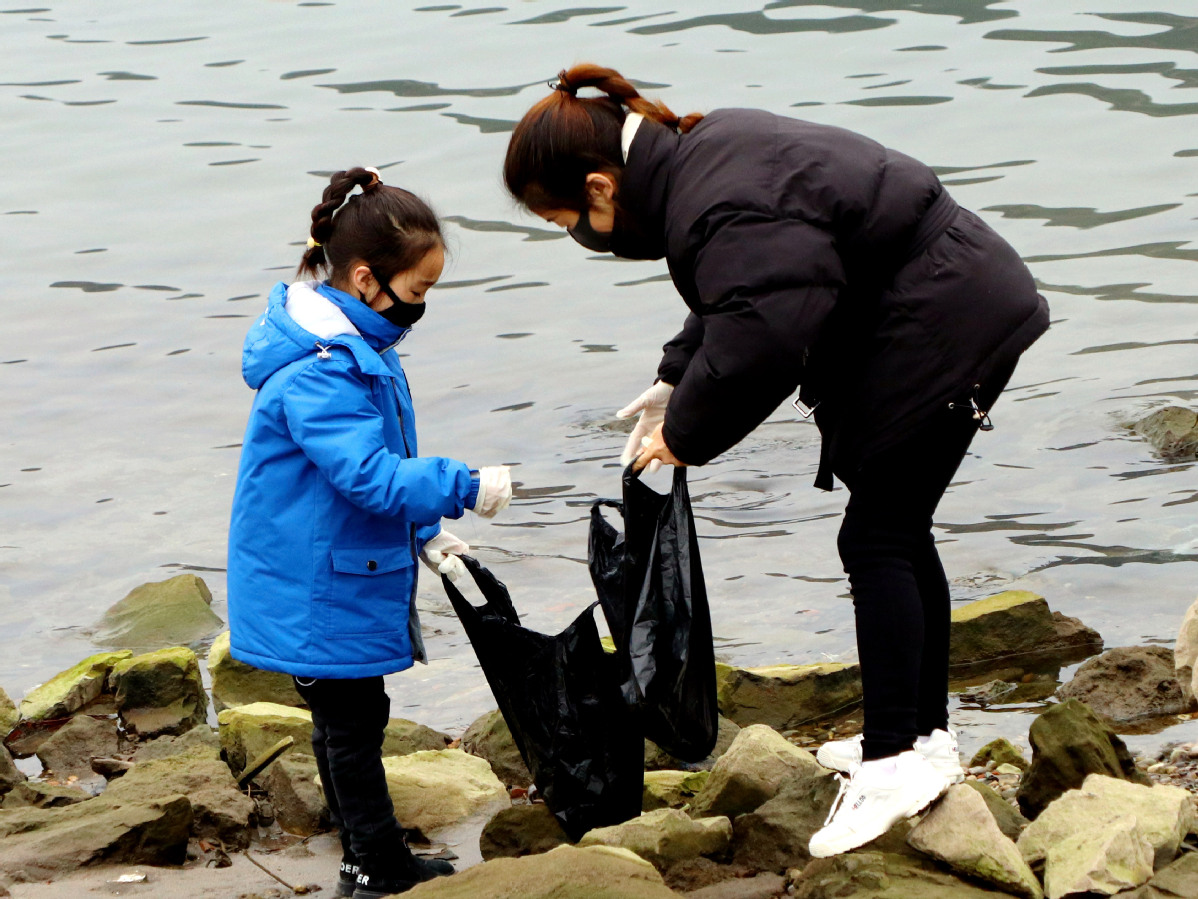 Volunteers remove garbage during an operation on the banks of the Yangtze River in Yichang, Hubei province, on the fifth day of Chinese New Year.

In October 2016, Li founded Sanxia Yigong, which has about 380 active members and many more occasional participants.

He said that since the group was founded, the number of contacts on its WeChat account has risen sixfold to 3,500, and many people express deep interest in the group's activities.

To avoid short-lived popularity, Li has led by example. He has only missed three of the group's more than 500 collective operations, and each time he had a sound reason.

"Once was because I had to attend a crucial meeting related to my work, and once was for a relative's funeral. On the other occasion, I had to drive my son to the place where he took the national college entrance exam," he said.

In addition to support from the public, local authorities have also stepped in to aid his endeavors.

At first, the ant workers were unable to find suitable places to dispose of the garbage they collected, so they had to pile the trash up on the riverbank and hire a truck to carry it away every few weeks.

Now, authorities in the city's Xiling district have set up an office to assist the workers' activities, and also provide a truck to transport the waste immediately after every operation.

Li refuses all offers of financial assistance from local businesses. "We only accept donations such as trash bags, rubber gloves and bottled water," he said.

"I like to ask for donations on our WeChat moments feed, where users can share photos with captions or websites, because it helps to get them more involved in the process."

It seems that things are developing in Li's favor. According to the Yichang government, more than 600,000 volunteers have joined various activities designed to help restore the local environment, which is something the city can be proud of.