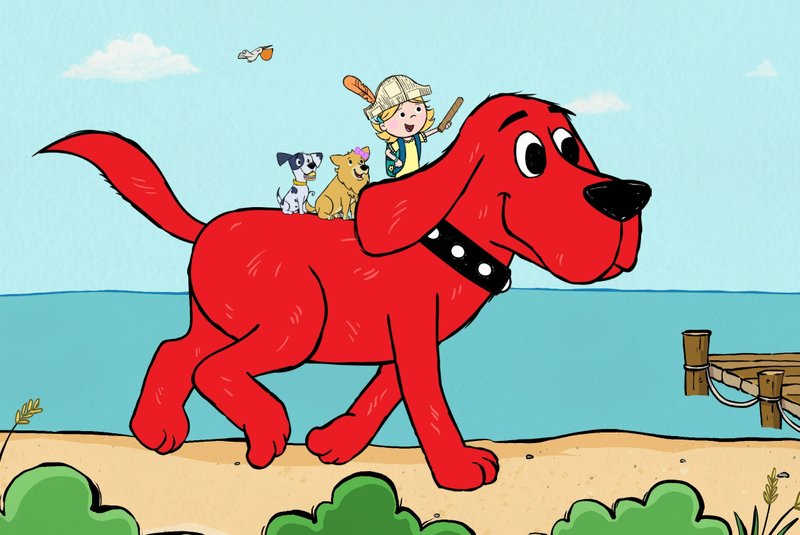 This image released by Scholastic Entertainment shows a scene from the reboot of “Clifford the Big Red Dog.” (Photo: AP)

Who’s your favorite big red dog? If you have one, chances are his name is Clifford.

Scholastic Entertainment is rebooting the TV series about the giant dog with an equally large heart this week on Amazon Prime Video and PBS, the latter his home since the early aughts.

Each episode will include an original song in a range of genres sung by the new main voice artists, 13-year-old Hannah Levinson for Emily Elizabeth and 27-year-old Adam Sanders reprising Clifford, who was once voiced by John Ritter.

Clifford and his positive life lessons have never gone away in video and book form around the globe, since Scholastic Inc. published Norman Bridwell’s first story in 1963, helping to launch the company as a premier publisher of children’s and young adult fare.

The TV series “Clifford the Big Red Dog” has been on a break at PBS for new episodes since his puppy prequel ended in 2006. The original show premiered in 2000 and ended in 2003, though Clifford has been rerun through the years on TV, along with videos on streaming platforms.

“We know from research that the show’s focus on life lessons is exactly what today’s families are seeking. Research shows that parents’ No. 1 concern today is whether their kids will develop character skills, like kindness, honesty, and empathy,” said Lesli Rotenberg, chief programming executive and general manager for children’s media and education at PBS.

In the new series, Clifford and Emily speak to each other, but only when they’re alone. Clifford and his dog pals had always chatted using words instead of woofs, but he was all dog with humans in his past TV life.

“We really wanted to build up the friendship between Clifford and Emily Elizabeth,” said Caitlin Friedman, senior vice president and general manager of Scholastic Entertainment. “And we wanted to bring her more into the adventures. It used to be that Clifford and his dog friends would have their own story and she would dip in and out.”

The look of Clifford hasn’t changed much. His fur is more textured to make him fluffier and he has a bigger, rounder face.

As for the stories, they’re “a little more empowering for girls, as well as for boys,” said Iole Lucchese, president of Scholastic Entertainment and chief strategy officer for Scholastic Inc. “We want to make sure that every child can see themselves on Birdwell Island.”

At least one child is already thrilled.

Hannah, the new voice of Emily Elizabeth, is a Toronto eighth-grader and dog lover who has been acting since she was about 6. She’s been in production on Clifford’s show for more than a year after diving into the books.

“When I booked the role, I was so excited because I knew that these stories were such a big part of people’s childhoods just like they were for my older brothers,” she said.

Hannah, girl to her 11-year-old golden retriever, Lexie, said she has lots in common with Emily Elizabeth.

“We’re both very determined and we won’t stop until we’ve solved the case or resolved the problem. There are many instances in the show where Emily Elizabeth will be on a mission and something is not going her way. She takes charge and she tries to do her best, to do what she can to help. I’m exactly the same way.”

This show and its town, from the early years to the present day, are aimed firmly at projecting kindness, empathy and living in harmony. Clifford has also gone a long way in inspiring imaginative play among kids ages 2 to 5, along with teaching such things as phonics and encouraging them to read.

Bridwell, who died in 2014, wrote and illustrated just under 50 of the 500 or so Clifford books that Scholastic has published. He based the girl character on his own daughter, Emily Elizabeth. Today, there are more than 133 million Clifford books in print in 16 different languages.

The original “Clifford the Big Red Dog” series aired in 110 countries. The new series will be available on Amazon Prime Video on Friday and PBS Kids on Saturday.

In addition to the TV reboot, a film is scheduled for release in November 2020, starring Darby Camp as Emily Elizabeth and John Cleese as a mysterious, magical character named Bridwell. Clifford doesn’t talk in the movie and Emily was aged up to 12.

Sanders, as a boy, said he was more into silly cartoons than wholesome Clifford.

“I watched some of the old episodes to get a sense of how John Ritter portrayed him as very optimistic and very youthful, full of compassion,” said Sanders, who also lives in Toronto.

Clifford is his first big gig. The animal rights activist and former babysitter and camp counselor couldn’t have asked for a more Zen experience.

“I enjoy my time so much in the booth with the other actors. The show doesn’t really touch on anything modern or political. It’s very innocent,” Sanders said. “The focus is just really on simple core values of family and friendship and community and respect for one another. It brings it down to the basics.”