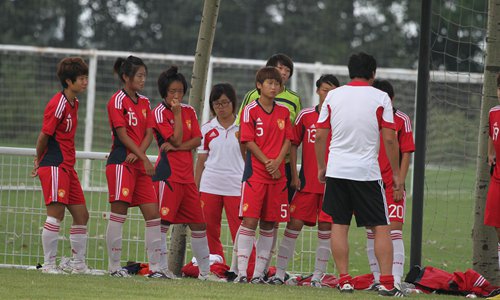 Police in Danyang, East China's Jiangsu Province, are investigating a coach of a local female youth soccer team who is suspected of molesting his players and charging excess fines.

An employee at the football training base in Jiangsu where the coach works confirmed with the Global Times on Monday that the coach is under investigation by the police and his punishment by the base will be decided after the investigation.

A Weibo user posted photos of a letter of accusation from several parents on Monday, which said that coach Chen Guanghong molested one of the players in the female youth soccer team, which consists of 13 to 15-year-old teenage girls.

Chen, a national-level coach and one of the provincial model workers, has led the team to win the under 18 women's soccer championship twice at the National Games and is part of the coaching team for the national youth soccer team, training a number of national female players, according to a report by the Yangtze Evening Post.

The letter said Chen asked the girl to meet him in his dorm room one night in June and forced her to take all her clothes off. And Chen said that if she did so, he would let her become the backbone of the whole team.

The player took her upper clothes off but Chen was still unsatisfied and continued to abuse her. Chen told her to consider for one week about whether to take all her clothes off for him.

After one week, the girl was suffering from stress and hid in an empty warehouse until her parents and another assistant coach found her.

The letter also said that Chen and one of his assistant coaches, Ling Yuyang, charged excess fines for some mistakes. A photo posted by the netizen shows that one of the players transferred 5,000 yuan ($702) to Ling's WeChat account.

The report by the parents was submitted to the provincial government on September 2.

Some parents have taken their children out of the team.

Whether Chen's unlawful behavior is a criminal offence depends on the number of victims and the mental state of these victims, Yang Hong, a lawyer specializing in the rights of women and children, told the Global Times on Monday.

"These girls are under 16 years old so the case is more serious," Yang said. "And if the number of victims is more than three and the investigation confirms that Chen's behavior seriously hurt their mental state, Chen is very likely to be punished according to the Criminal Law."

Yang added that Chen's possible crime is compulsory indecency and insulting women, according to the 237th article of China's Criminal Law, which could lead to a sentence of imprisonment of not more than five years.