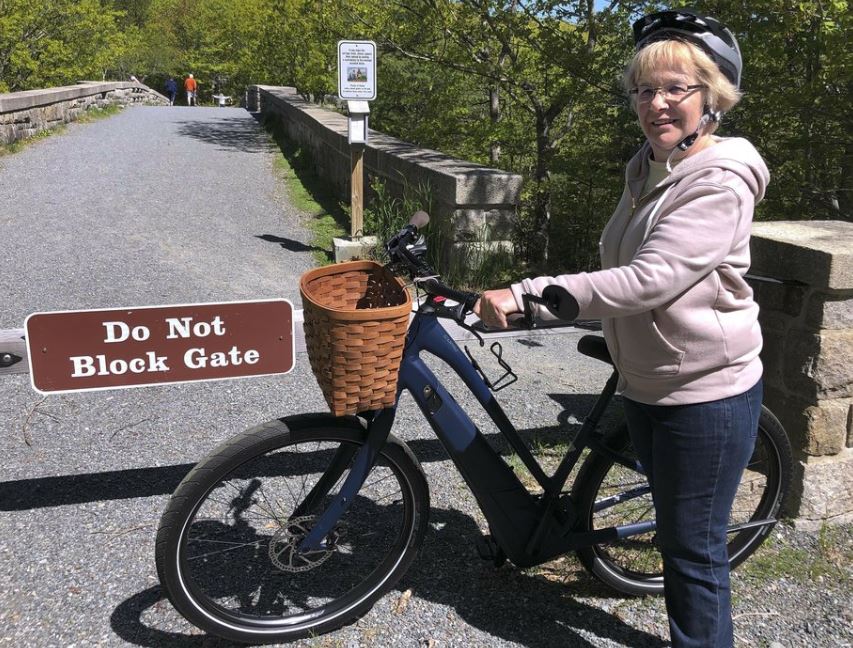 Janice Goodwin stands by her electric-assist bicycle at a gate near the start of the carriage path system where bikes such as hers are banned inside Acadia National Park, in Bar Harbor, Maine. (File photo: AP)

Motorized electric bicycles may soon be humming their way into serene national parks and other public lands nationwide, under a new Trump administration order — hotly opposed by many outdoors groups — allowing the so-called e-bikes on every federal trail where a regular bike can go.

Sales of the bikes, powered by both pedals and batteries and small motors, are booming, and some aging or less fit people have sought the rule change. The change would allow them to whirr up and down biking trails in the country’s roughly 400 national parks and other federally managed backcountry.

“Reducing the physical demand to operate a bicycle has expanded access to recreational opportunities,” Bernhardt wrote in the order.

In Bar Harbor, Maine, on Friday, Gordon Goodwin, 69, said he and his wife look forward to riding the 57 miles (92 kilometers) of carriage paths that meander throughout Acadia National Park, offering stunning views of lakes, mountains and the ocean.

The paths are popular with bicyclists, but e-bikes have been barred from them and had to stay on the park’s roads instead.

“We’re stoked. We’re really stoked,” Goodwin said. “There’s just too much traffic on the main park roads that you can’t enjoy them. It’ll be great to get in the park and see nature and all that stuff.”

But more than 50 hiking, horse-riding and other outdoor and conservation associations, including the Appalachian Trail Conservancy and Pacific Crest Trail Association, objected in a July letter to the Interior Department. They say the administration acted to fundamentally change the nature of national parks with little or no public notice or study.

“If you’re hiking on a trail in Utah and you’re rounding a bend and something’s coming at you at 20 mph, that really changes the experience,” said Kristen Brengel, a vice president of the National Parks Conservation Association, a non-profit that advocates for the national park system.

“It’s pretty jarring” to those who take to public lands to escape city noise and stress for nature, Brengel said. “You’re adding significant speed and a throttle to those trails.”

The Interior Department said Friday morning it would have a statement later.

E-bikes are the fastest-growing segment of the bicycle industry, with US sales jumping 72% to $144 million last year, according to the NPD Group, which tracks bike sales. The motorized bikes are popular with commuters and baby boomers who might not otherwise be able to get out on a bicycle.

The bikes, which can cost $2,000 or more, combine the frame of a regular bike with lightweight batteries and electric motors.

In parks and other public lands as on city streets and sidewalks, people moving on vehicles powered by electric or gasoline engines frequently jostle for the right of way with people on foot or traditional bikes. In the National Park Service, officials over the decades have had to carefully sort out rules and systems to minimize conflicts.

In their letter, the outdoors groups complained the move allowing motorized bikes on bike trails broke with policies dating back to the early 1970s confining cars, dirt bikes, all-terrain vehicles and all other motorized vehicles to roads and designated areas and trails on public lands.

Interior’s order allows motorized bikes that can go up to 28 mph to be classified as regular bikes.

Thursday’s directive calls for a period of public comment on the individual rule changes under Bernhardt’s order.

Guidance must be completed within 30 days on how the new e-bike policy will be carried out by the National Park and National Wildlife Refuge systems, and on land overseen by the Bureau of Land Management and Bureau of Reclamation.

Adam Gariepy, manager of the Bar Harbor Bicycle Shop, said Friday he’s “tentatively happy” about the new rules. But he has reservations because some e-bikes like his can reach around 28 mph, he said. That speed could be dangerous on trails that have a mix of bicycle riders, horses and carriages, hikers, families and pets.

“It’s a two-edged sword. It’ll be great for older folks who are afraid of the hills and want to continue riding. But there should be some speed limit with them,” he said.

Brengel, the park foundation official, noted the order comes in a season when thousands of volunteers with trail groups have been in the parks all summer long improving the trails.