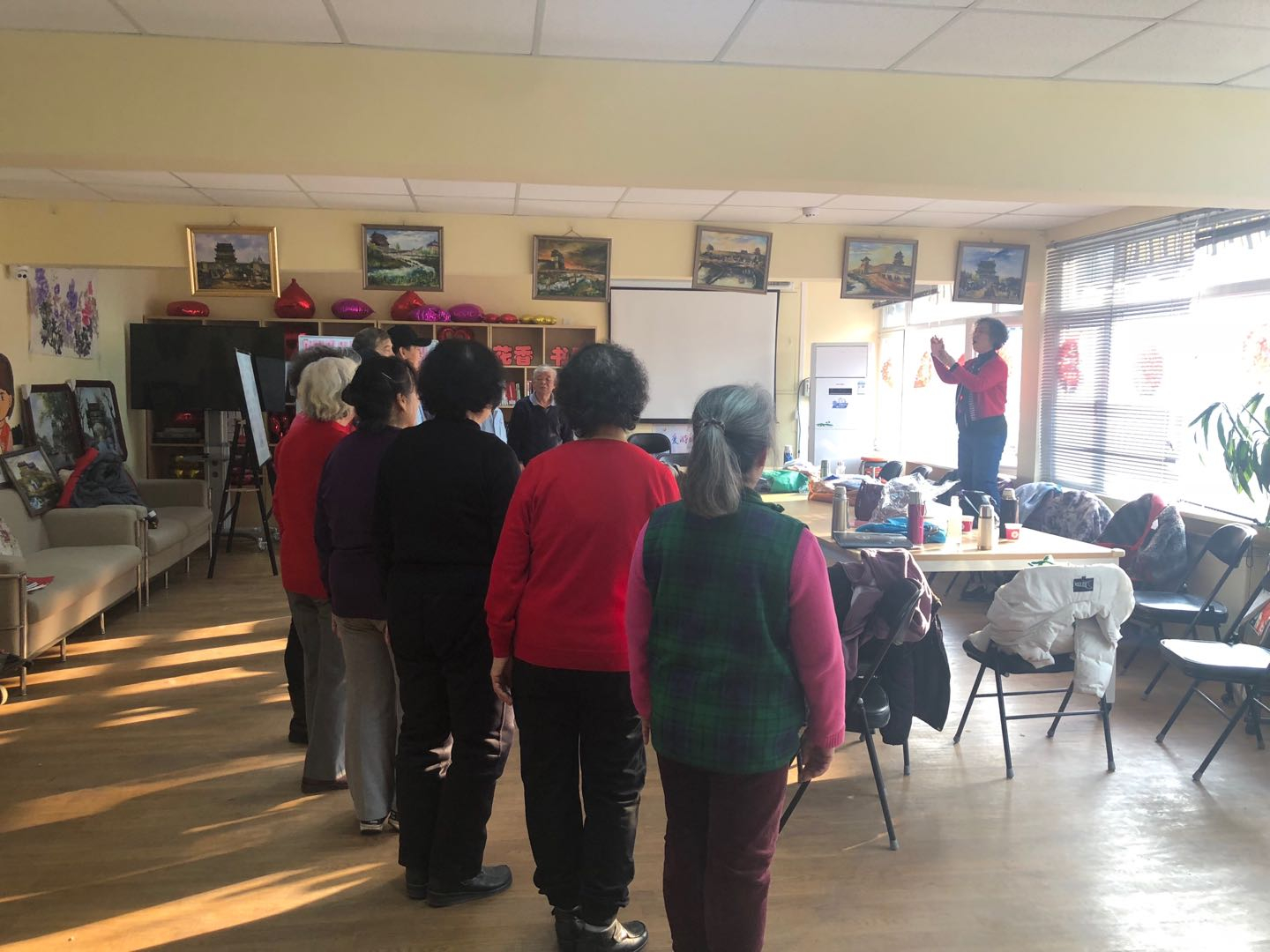 A group of senior Peking opera lovers in the middle of a rehearsal at Gulouyuan senior center. (Photo: CGTN)

In a typical Beijing hutong, flanked by traditional courtyards adorned with red lanterns, lies a haven for pensioners who are not ready to resign from life and its small joys.

With the help of a four-member team, the Gulouyuan senior center welcomes 50 senior people every day.

When I arrived, a group of Peking Opera fans were getting ready for rehearsal. Their leader, an old lady in a bright red sweater, spoke with the rigor of a 30-year-old. "We should all wear our best clothes for the rehearsal," she instructed while filming with her phone.

China's population is turning old at an unprecedented speed – one in four will be a senior by 2030.

In graying China, community senior centers are the silver lining for many. It's a middle ground between relocating to a nursing home and idling about at home alone.

In 2011, the Chinese government rolled out a policy to develop a three-tier system of elderly care services, whereby 90 percent of old people are expected to spend their senior years at home, seven percent at community senior centers and three percent at residential facilities.

Chinese people are keen on keeping the family together and private residential facilities tend to be expensive – no less than 20,000 yuan (around 3,000 U.S. dollars) a month at some places.

There, they can enjoy a plethora of services ranging from foot massages to hot meals. At certain centers, people can take a shower, at others, they have access to washing machines.

At the Gulouyuan senior center, staff members offer to queue in line on behalf of the elderly to book a doctor's appointment in hospitals.

Lunch costs 18 yuan (2.6 U.S. dollars), and seniors can eat on site or ask for takeouts. The portion is enough to sustain them for two meals.

Psychological counseling is also provided. Professionals help mediate fights and disputes between neighbors or among family members for seniors who do not have anyone to talk to.

Affordability is essential for community senior centers, says 56-year-old Liu Yan. She's the manager of a senior center in Beijing's Chaoyang District, which aside from daycare services, provides accommodation and nursing care for those who cannot live independently.

For a monthly fee of 2,000 yuan (300 U.S. dollars), elders can receive nursing care, accommodation and meals at the facility.

Home visits are also available for those who either can't or don't want to go to the center. With just one phone call, staff members can deliver meals to a senior's house, provide emergency first aid and even offer foot massages.

"The idea is that in densely populated areas, elderly care can be provided so fast that before a soup turns cold, help is at the doorstep," says Miao Yongchao, a health care consultant and founder of Healthcare Watch, an account on Chinese instant messaging service WeChat dedicated to health care issues.

Opening up the elderly care market

Under the looming challenge of a rapidly ageing population, China is gradually opening up the industry for private and foreign investment. In 2014, foreign investors were allowed to manage wholly-owned entities in the sector; and by 2020, the elderly care market will be fully opened up.

Government-run nursing homes, which used to be the only option for elderly seeking residential senior care, are notoriously crowed. One example highlighting the pressure on such facilities is the No.1 Social Welfare Home which reportedly has more than 10,000 applicants waiting for 1,000 available beds.

But overcrowding is not an issue at private community senior centers.

"People still have doubts about private institutions…partially because media often reports incidents of elderly abuse at residential senior centers," says Liu, who runs her own senior center in Beijing.

"Those incidents are in fact rare."

But securing a minimal number of residents has proven hard as private centers need to balance the book.

Though Liu's facility enjoys government subsidy — the place is given for free by the neighborhood community and utilities are all paid — at least ten residents need to stay at the 15-bed center in order to break even. At present, the center is home to nine residents. The first year of operations witnessed only two guests.

In a bid to support private-run senior centers, the government provides three types of subsidies: subsidy for the operation of the center, subsidy for senior care chains and subsidy for offering services to elders.

The first and second type are worth at least 50,000 yuan (7,400 U.S. dollars) annually, meanwhile there is no cap on the amount granted for the third one.

The more people a center serves, the greater the subsidy is.

But accessing these subsidies is not easy, some argue.

In order to receive subsidy, the center needs to instruct their guests to pay for services using their senior citizen cards. Paying in cash does not count.

However, some forget to bring their card when lining up for lunch, while others simply give it to their children for fear of losing it.

"Can I tell them to go back home and get their card? Of course not," Liu says.

In China, thriftiness is a virtue. Yet it also holds back the development of the private senior care industry.

"Chinese seniors do not have the habit of spending money," says Liu, adding, "even if they do have some money, they would want to save it for their children."

"The emergence of senior care chains is a great boost for the industry, since it brings down the per capita cost of services," says Miao, the health care consultant.

He argues that the economy of scale leads to the standardization of senior care protocols and procedures, leading to safer and more affordable service for old people.

But things might be different when the current generation turns grey.

An increased demand for diversified services will be the driving force for the senior care industry, notes Miao. With an accumulated wealth and matured spending habits, the future generation of elderly people may finally be willing to splash some cash on themselves.