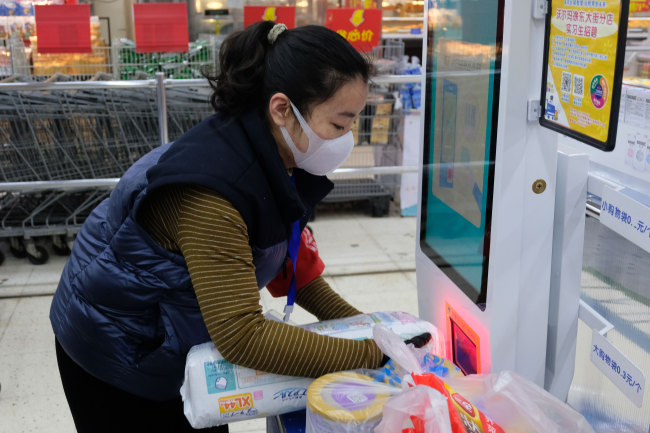 Peng Jing purchases products for residents of her community in a supermarket in Wuhan, central China's Hubei Province, February 25, 2020. (Photo: China Plus)

All residential areas in Wuhan have been under lockdown since Feb. 11, as part of efforts to minimize the movement of people and contain the spread of the novel coronavirus.

However, seniors and those with special needs have to rely on community workers and volunteers to assist them in getting supplies.

33-year-old Peng Jing is the leader of the community workers and volunteers in the Wuchang District.

She and her teammates go to the nearby supermarkets and pharmacies every day to purchase whatever the residents have ordered online.

"The elderly people whose children are not living with them don't know how to order food online, so we have to run errands for them. In addition, some residents ask for specific brands of products such as infant milk powder and diapers, and we also need to buy for them," Peng said.

Peng Jing said she's been doing community work for over a decade, and the coronavirus outbreak has renewed her appreciation for her job.

"As a community worker, I've never imagined I would be so important to residents. No one had been prepared for the task when the outbreak started. But I'm glad none of my teammates have shied away from this challenge," said Peng Jing.

The residential community Peng Jing works for is home to over 4,200 families. But there are only 11 community workers in total. Fortunately, some residents have volunteered to help.

Fu Yunlong is one of them. As a local, he has gained a new respect for the community workers.

"I went out with Peng Jing yesterday. She has two mobile phones and they never stopped ringing," Fu said.

Fu said one of the moments that really touched him in this job was when a senior resident showed his appreciation by giving him gloves for buying medication for him.

"The old man has thyroid disease. However, the medicine he needed couldn't be found in nearby pharmacies. So, we drove a long way to buy it for him. After I delivered it to his door, he was so grateful. He gave me some gloves and told me to carefully protect myself. He doesn't have any gloves either," said Fu Yunlong.

Over 50,000 people are working in more than 7,000 residential communities as volunteers in Wuhan to help the local residents.