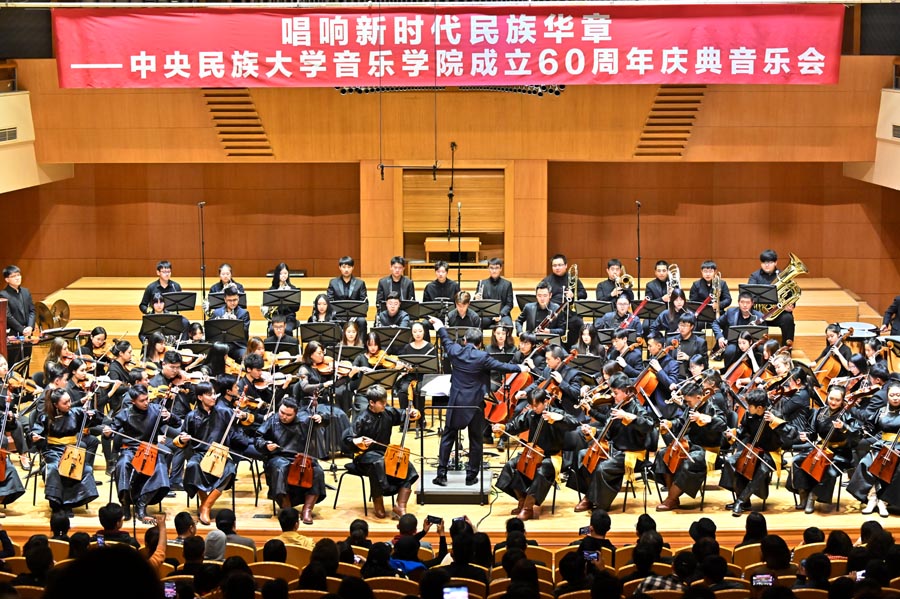 It was one of the several highlights of a concert held at the Beijing Concert Hall on Monday night, celebrating the 60th anniversary of the establishment of the Music School of Minzu University of China, a leading musical school in folk music education in the country.

Western instruments were also spotlighted at the show, with the school's symphony orchestra performing under the baton of famed conductor Xia Xiaotang. The repertoire included Czech composer Bedrich Smetana's Piano Trio in G minor (1855), and Ode to the Red Flag created by noted Chinese composer Lyu Qiming in 1965.

Speaking about the past 60 years, Bao Aijun, dean of the music school, said, "The enrollment of our school focuses on students from ethnic groups across China. We welcome all talents from these places and attach great importance to the inheritance and development of ethnic music and culture. We have never wavered or given up this concept."

"We've stepped into the academic field of artificial intelligence to help uphold the future of music education. Together with pioneers from the modern tech industry, we've created a 'Joint Lab of AI Music' to explore the integration of new technology and music education, and also to find a multi-dimensional innovation path for folk music education," Bao noted.

Given that many Chinese parents nowadays tend to send their children to learn Western instruments such as piano and cello rather than Chinese ones, Bao said it's a problem that stems from historical adaptations.

"The higher education system in modern Chinese universities was adapted from the West. Traditional Chinese music didn't have much of a place in this system at the very beginning. Its proportion was very small, and the degree of specialization and systemization was not enough as well. As a result, the popularity of Western musical instruments outweighed Chinese ones," Bao explained.

"So we should start with young children and primary education, which I think will gradually cultivate children's passion for traditional instruments, traditional music and culture," he added.