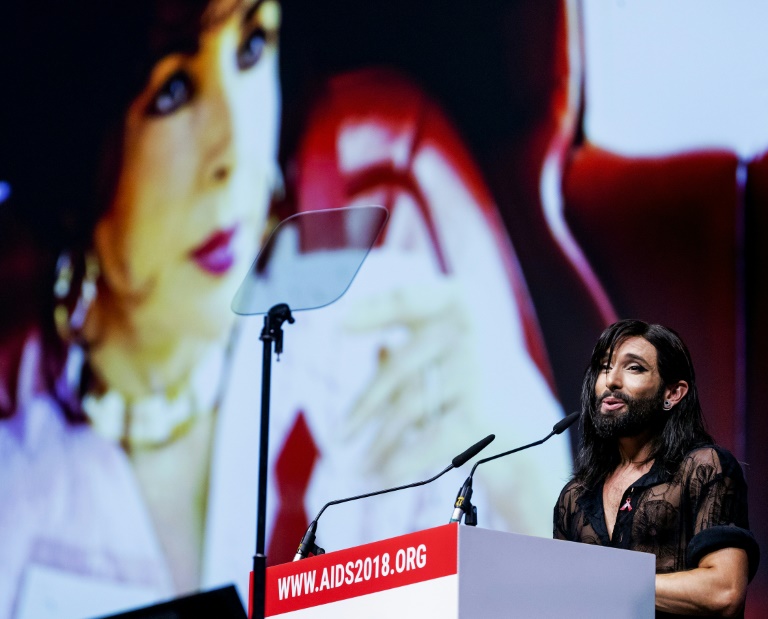 Eurovision Song Contest winner Conchita Wurst speaks at the official opening of AIDS2018 in Amsterdam, calling for all people with HIV like herself to have access to antiretorival therapy (Photo: AFP)

Austrian drag queen Conchita Wurst rallied her considerable star appeal on Monday to carve away at the stigma surrounding HIV, the AIDS-causing virus she and 37 million other people live with today.

"There's a lot of... stigmatisation that comes with HIV and I believe that’s the case because too many people know too little about this disease," the bearded performer, who won the 2014 Eurovision song contest, told the 22nd International AIDS Conference in Amsterdam.

Her biggest fear was talking about her infection, said the singer who announced her HIV status on social media in April.

But having initially shied away from revealing her diagnosis, she now wishes "to use the attention I get and to direct it to this disease and to help make it just normal to talk about it."

While she received "nothing but support", Conchita stressed that being HIV-positive "is just a fraction of who I am."

"Today, I feel fitter, more beautiful and stronger than ever before in my life," the singer said to loud applause.

Her condition was in large part thanks to antiretorival therapy, which allows HIV-positive people to live long, healthy lives.

As long as people have access to treatment, "they can end up virally suppressed, unable to transmit the virus, and (to) carry on with pursuing their life passions and realising their dreams," Conchita told delegates.

However, some 15 million people around the world still have no access to the life-saving, virus-suppressing drugs.

"How long will it take until we make our research and affordable therapies accessible to every single human who needs it?" asked the singing star.

"I would like to know why medical treatment advances that I have access to are still not available to so many affected."