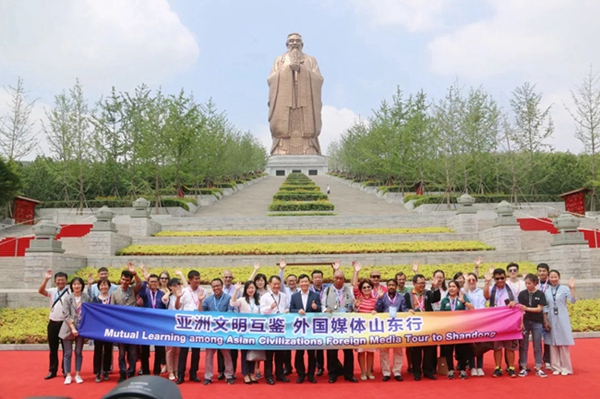 Foreign journalists pose for a group photo in front of the Confucius statue while touring the Nishan Holy Land in Qufu, Shandong province on May 17. (Photo: NiShanShengJing WeChat account)

The Nishan World Center for Confucian Studies was founded on Sunday in Nishan, the ancient philosopher's birthplace, in eastern China's Shandong province in an effort to establish a research and study center for Confucianism with global appeal.

Created by the Ministry of Education and Shandong's provincial government, the center will integrate research on Chinese traditional culture from home and abroad to develop a world-recognized Confucian center focused on academic research, talent cultivation, communication and international cooperation.

Several branches will be built at home and abroad, according to development plans.

Confucius (551-479 BC) was born in Nishan, in the Shandong city of Qufu, and his philosophical teachings, known as Confucianism, are a crucial part of Chinese traditional culture.

Studies should be carried out with a spirit of openness, inclusiveness, exchange and mutual learning, he said.

With China's economic and social development reforms, further opening-up and the rapid advancement of online networks and new media, there was an urgent need to deepen the understanding of Chinese traditional culture and tap the values embodied in it in order to construct a system that could inherit the culture and pass it down, said Sun Yao, a vice-minister of education.

Wang Xuedian, executive vice-president of the Advanced Institute of Confucian Studies at Shandong University, said, "With China's comprehensive national strength increasing, it's inevitable that the world's center of Confucian studies returns to its homeland."

Confucianism originated in China, Wang said, but for a long time, especially during the 1980s and 90s, people went overseas to study Confucianism, as well as other Chinese classics.

Confucianism is seeing a revival as China draws on its traditional culture to develop its vision, concepts, values and ethics. However, how to creatively promote Chinese traditional culture to keep pace with the times, and to ensure it is well understood and accepted by young people, has become an issue, experts said.

Over 540 Confucius Institutes at universities and 1,190 Confucius Classrooms in schools - where Chinese language and culture are taught - have been established in more than 150 countries and regions around the world.