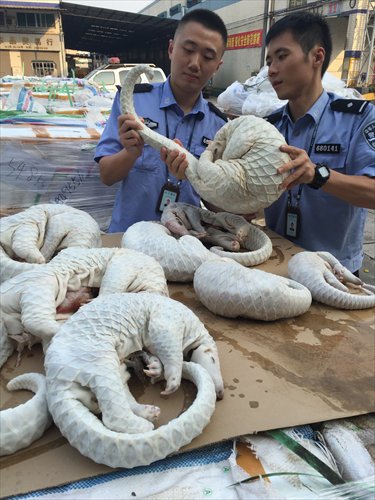 It might be too soon to announce the functional extinction of Chinese pangolins, but stronger protection is urgent after a Beijing-based environmental protection foundation announced the species had died out.

Wildlife protection experts noted that since pangolins are widely distributed in China, there must be long-term observation across many sites to judge whether the species is functionally extinct, which means its population is too small to reproduce and maintain its ecological status.

Meanwhile, some experts, including Wu Shibao, a pangolin expert and professor at the School of Life Sciences at South China Normal University, disagreed with the conservationists. Pregnant pangolins and wild pangolins carrying cubs were traced in recent years in South China's Hainan and Guangdong provinces and East China's Jiangxi Province, Wu told the Global Times on Sunday, noting the species can reproduce naturally. Wu agreed with the foundation's general observations, stressing that the species is extremely dangerous mainly because of poaching. "It might be functionally extinct in some regions," he said.

The Chinese pangolin population decreased by 90 percent over the past 20 years, and artificial reproduction to expand its population is not very effective, the Beijing News reported.

The International Union for Conservation of Nature in 2013 listed pangolins as "critically endangered." That is two levels more endangered than the giant panda, which was moved from "endangered" down to "vulnerable" in 2016 after decades of protection efforts. While deciding its status needs robust scientific proof, protection of pangolins should not wait until it is too late, Wu said.