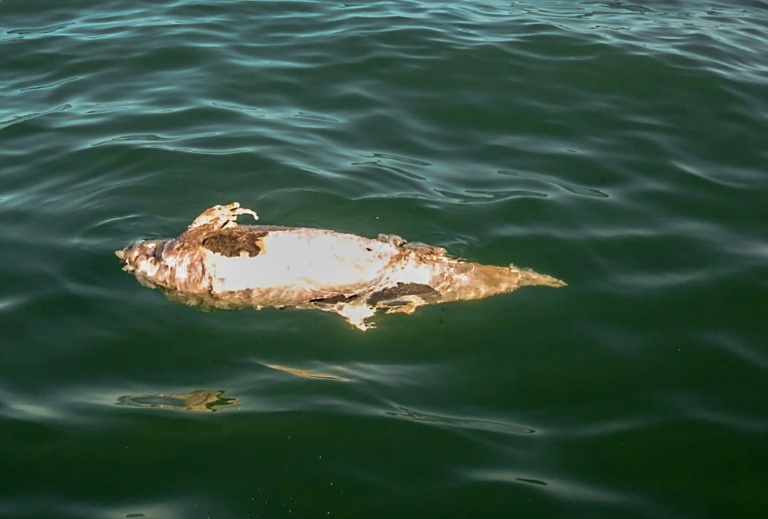 Only around 10 vaquita are believed to remain in their sole habitat off northwestern Mexico. (Photo: AFP)

Conservationists are urging countries to slap trade sanctions on Mexico over its failure to rein in illegal fishing that could doom the vaquita marina porpoise to extinction within months.

With only around 10 vaquita believed to remain in their sole habitat off northwestern Mexico, environmentalists insist only "drastic measures" can rescue the world's smallest porpoise from disappearing altogether.

They are appealing to countries attending the Convention on International Trade in Endangered Species (CITES) in Geneva to wield the treaty's harshest sanction in a bid to force Mexico to ensure the vaquita's survival.

"The parties should sanction Mexico and put a ban on trade of CITES-listed species from Mexico until they get the situation under control," Zak Smith, Director of International Wildlife Conservation for the Natural Resources Defense Council (NRDC), told AFP.

CITES, which regulates trade in more than 35,000 species of plants and animals, has the power to sanction countries that break the rules or fail to rein in illegal trade in species protected under the treaty.

Known as "the panda of the sea" for the distinctive black circles around its eyes, the vaquita has been decimated by gillnets used in the Gulf of California to fish for another endangered species, the totoaba fish.

'Cocaine of the Sea'

The totoaba's swim bladder is considered a delicacy in China and can fetch up to $20,000 on the black market.

The lucrative market for the swim bladders has turned the Gulf of California into a battleground, as armed poachers use drug cartel-like tactics to get hold of the "cocaine of the sea".

Policymakers from more than 180 countries attending the 12-day CITES meeting are due to discuss the plight of the vaquita on Monday and could -- in theory -- heed environmentalists' calls for sanctions, although such a move is unlikely.

Environmentalists say they hope the parties will at least warn Mexico that sanctions will be on the table if it does not show progress in safeguarding the vaquita.

"If the CITES parties don't respond at this meeting and take drastic and dramatic action to compel Mexico to do more... this could be the meeting where the final nail is put into the vaquita coffin," said DJ Schubert, a wildlife biologist with the Animal Wildlife Institute.

Mexico, meanwhile, is adamant that it is doing everything possible to save the vaquita, and should not be sanctioned.

"I don't believe that a simple solution like penalising Mexico will serve the vaquita," Hesiquio Benitez Diaz, the country's Director-General of International Cooperation and Implementation, told an event last week on the sidelines of the CITES meeting.

In 2015 Mexico's government declared a ban on fishing in a 1,300 square kilometre (500 square mile) area off the coast of San Felipe, but has been unable to rein in the rampant illegal fishing in the area.

"The situation of organised crime that is operating in the region goes beyond the capacity of many governments," Diaz said, stressing that "these people are better armed than our authorities."

However environmentalists insist Mexico could police the small area where the vaquita live if it were willing to put in the resources.

The region "is smaller than the size of the city of Los Angeles," Smith said.

Mexico, meanwhile, is calling for a "more creative" approach.

It has asked for CITES approval to set up totoaba fish farms, which it maintains would satisfy the demand for swim bladder and drive down the price, thereby removing the incentive for poachers.

Critics warn that opening a legal market for captively-bred totoaba would provide an opportunity for laundering illegally poached totoaba.

And even if the plan worked, they say it would not help in the short term, since the demand is for large swim bladders, from large fish, which would take years to breed.

"By that time, it would be too late to save the vaquita," Alejandro Olivera, who works in Mexico for the Center for Biological Diversity, told AFP.

Mexico has also made other "creative" attempts to save the vaquita porpoise. In 2017, it launched a plan to round up all remaining vaquitas and relocate them to a protected area.

But the project was aborted when one of the first captured vaquitas died.

Now, Olivera said, scientists are trying to gather vaquita DNA samples "so that in the future, we can bring them back."

If the vaquita does become extinct, it would be the first species listed under CITES highest-priority Appendix I to suffer that fate since the treaty took effect four decades ago.

"It would be a tragedy," Smith said.

"If we can’t save the vaquita, what does it say about all of our efforts to save wildlife?"