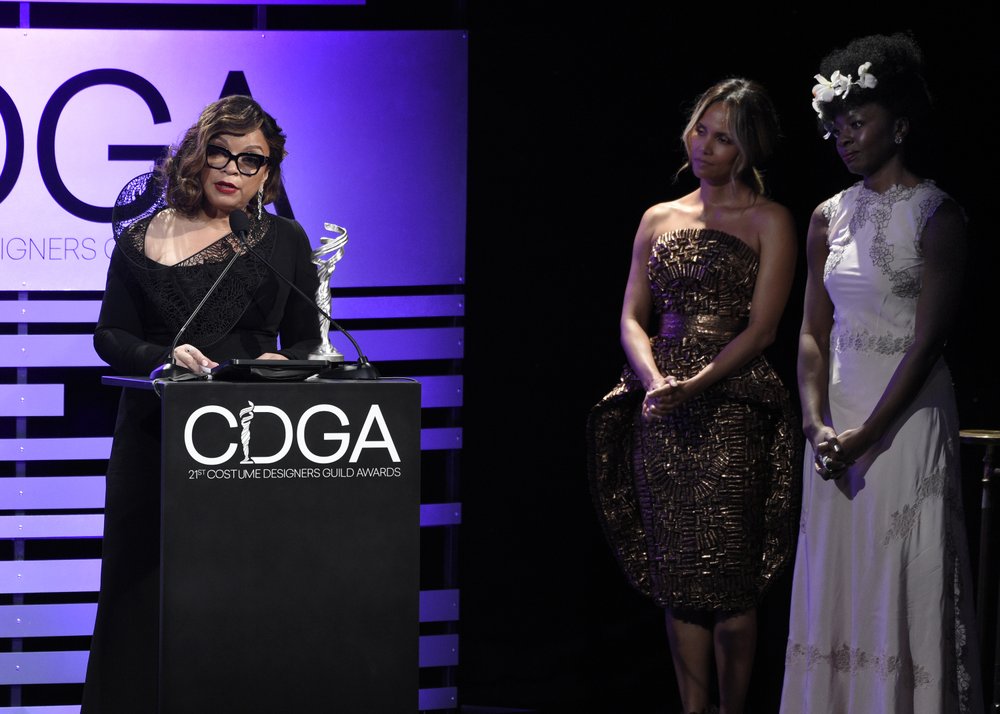 Ruth E. Carter may be receiving Oscar recognition for her costume designer work on “Black Panther,” but she told a packed room at the Costume Guild Awards on Tuesday night that she has created wardrobes for other superheroes throughout her illustrious career.

“After working on ‘Black Panther,’ you all asked me ‘How did it feel experiencing designing my first superhero?’ Truth is, I’ve been designing superheroes my entire career,” she said after receiving a career achievement award at the guild’s 21st annual awards show at the Beverly Hilton Hotel. The union celebrated the year’s outstanding work in film and television highlighting the intricacies of contemporary, period and sci-fi or fantasy designs.

While accepting a career achievement honor, the designer rattled off several films she worked on including “Malcolm X,” ″Amistad,” ″Selma,” ″Marshall,” ″Do the Right Thing” and “Meteor Man.”

“These same heroes and sheroes who helped shape our country helped me build my career and voice in the Afro-future,” said Carter, who was also won a competitive award for “Black Panther.” She could become the first African-American on Sunday to win an Oscar for best costume design.

“I am constantly inspired and carrying a message of perseverance and hope that each character shares from film-to-film,” she added. “There are pieces of me from my heart in each costume.”

The 18th century ensembles in “The Favourite” and the glitzy costumes in “Crazy Rich Asians” were also selected as the best costumes of the year Tuesday.

Halle Berry and Danai Gurira presented Carter with the career achievement award. The costume designer thanked “Black Panther” director Ryan Coogler, longtime friend and director Spike Lee and those who worked with her to create the costumes for the Marvel superhero film.

Gurira, who starred in “Black Panther” as one of Wakanda’s elite warriors, yelled out “This is the year of Ruth Carter” as Coogler looked on and smiled from his seat. Berry made a Wakanda Forever crossed-arm gesture before she called Carter “strong, respectful, opinionated and well-respected.”

“Ruth taught me the importance of a costume and how it was a portal into bringing my character to life,” said Berry, who was dressed by Carter in the 1991 film “Jungle Fever.”

Close was honored with the spotlight award as actor Michael Chiklis praised the actress for her ability to captivate audiences through her roles. He said “You sit up a little straighter. Your senses sharpen, because you know she’s about to make everything happen.”

Chiklis also said Close saved nearly 800 costume pieces she has worn in films, so they won’t get destroyed or sold to rental companies. The actress donated some of her costume collection to the Indiana University, where it will be preserved in an archival facility.

“My costumes have always been much more to me than whatever character they are designed for,” said Close, who is nominated for an Academy Award for best actress for her role in “The Wife.” ″They are all beautiful masterpieces created by a team who takes as greater pride in their craft as I do in mine. You make what I do possible.”

Actress Kate Walsh hosted the awards wearing different costumes throughout the night including a pink Cinderella dress, doctor’s scrubs and she dressed as a look-alike of blonde-haired Donatella Versace, the sister of the late Gianni Versace.

Madden received a round of applause during her speech about ending gender bias and wage disparity in the film and television industry.