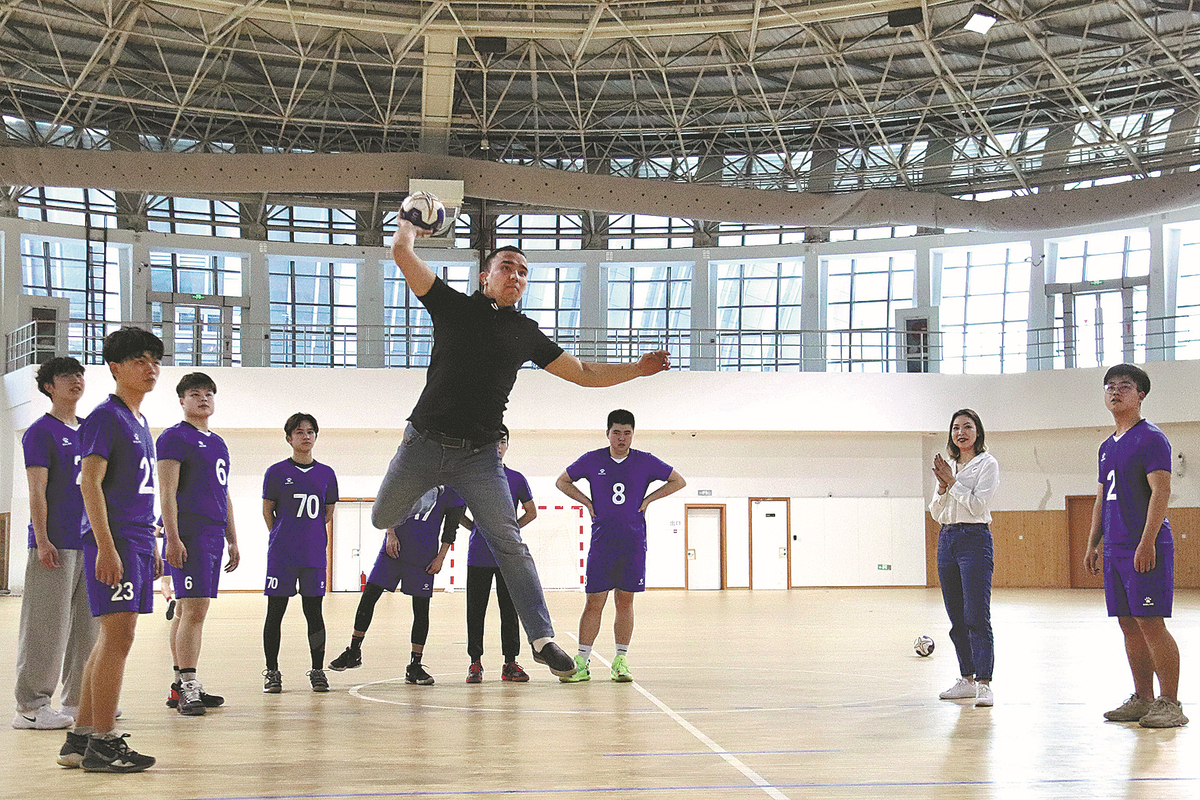 A student from Kazakhstan plays handball with his Chinese schoolmates at Zhejiang Gongshang University in Hangzhou, Zhejiang province, in March. (Photo: China Daily)

More Kazakh students are learning Chinese language and studying in China, thanks to the growing economic and cultural exchanges between the two countries.

Malika Zhang, 22, who is from Kazakhstan and is a third-year undergraduate student of sociology at Peking University, said she believes that the reason more Kazakh people are showing an interest in learning Chinese and willing to study in China is that China is Kazakhstan's neighbor and good friend, and the friendship is developing rapidly.

"We, as the young generation of Kazakhstan, would love to learn the language and culture of our neighbor," she said.

Moreover, there is a lot of cooperation between China and Kazakhstan, which means the two countries are communicating very well with each other economically, culturally and politically, and plenty of job opportunities are available for young people in Kazakhstan if they can speak Chinese, Zhang added.

She began to learn Chinese when she was 12 because she loved Chinese characters and calligraphy. She thought that if she started to learn Chinese, she could someday travel throughout China.

Although she found it difficult to learn Chinese, it was "a colorful and exciting journey for me, and I enjoyed it a lot".

She has read many books about sociology and anthropology since she was very young. The similarities of and differences between Chinese and Kazakhstan ethnography fascinated her, so she decided to study sociology at Peking University.

"The biggest impression of China is that it is developing very fast and Beijing, where I am living, is a fast-paced city," she said. "People here are very nice, hardworking and outgoing. Honestly, they have helped me a lot."

Shadi Aldabergenov, 18, a first-year undergraduate student at Tsinghua University's School of Life Sciences, said his mother, who got her master's degree in economics at Tsinghua, inspired him to learn Chinese.

"She was the person that always told me to pursue my education in China, and whenever I would ask her why, she would reply with a short answer: 'Because they are our neighbors'," he said.

China is one of Kazakhstan's closest neighbors, he said. The potential of the Sino-Kazakh relationship is endless, and the two countries need to cooperate and understand each other, and create mutually beneficial relationships to aid each other in nurturing a better future, he added.

He began to learn Chinese at a Confucius Institute in Kazakhstan when he was 15. Like any other language, learning Chinese language requires a lot of patience, he said.

His secrets to learning Chinese have included patience, using words as soon as they are learned, chatting with fellow students and trying to read online articles on topics related to newly learned vocabulary, he said.

He is happy that he chose this path to pursue higher education. "Chinese culture is like no other. It's very unique and rich, with over 5,000 years of history and development. In order to fully understand this, people should personally come and see this wonderful part of the world."

Zhanna Aigazina, 19, is an undergraduate in international economics and trade at the University of International Business and Economics in Beijing.

She began to learn Chinese when she came to China in 2020 because it is widely used in Kazakhstan.

She said she believes that the only shortcut for learning the language is to read and write more.

China is a good place with astonishing development, and it is necessary for young Kazakh people to learn Chinese to find the job they want, she added.