DeMarcus Cousins scored 14 points in his much-anticipated Golden State debut and Stephen Curry once again sparkled as the Warriors won their seventh straight game with a 112-94 victory over the Los Angeles Clippers on Friday. 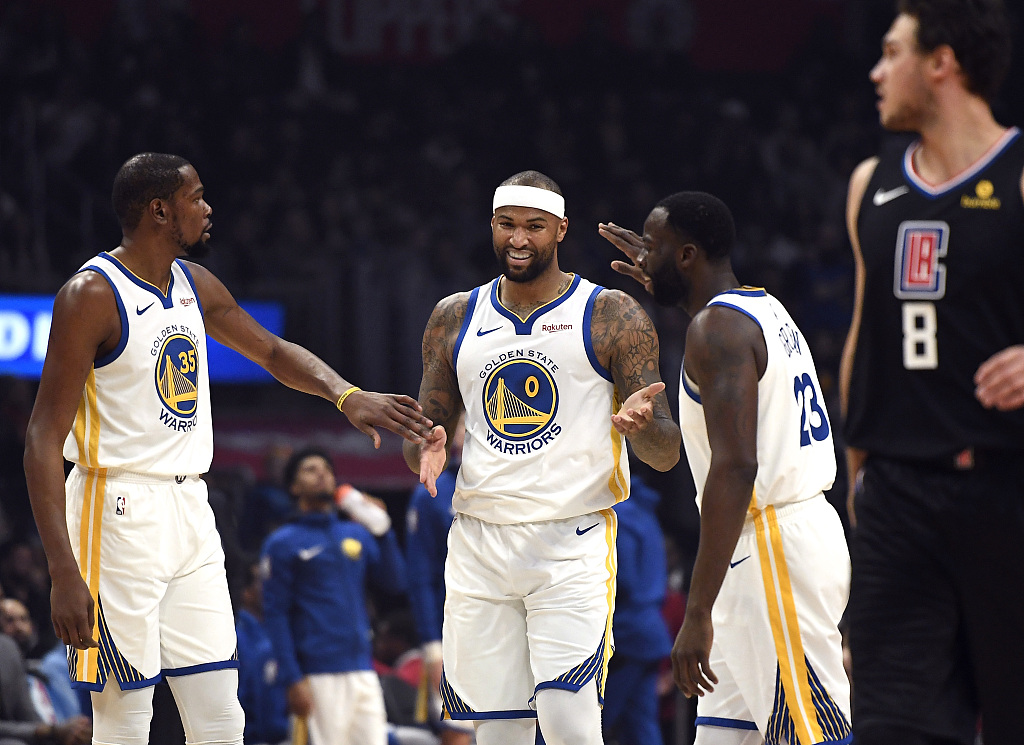 DeMarcus Cousins #0 of the Golden State Warriors is congratulated by Kevin Durant #35 and Draymond Green #23 after scoring a basket against Los Angeles Clippers at Staples Center in Los Angeles, California, US, on January 18, 2019. (Photo: VCG)

Cousins shot five-of-11 from the floor, grabbed six rebounds and had three three pointers before fouling out after just 15 minutes of playing time.

Cousins season debut came almost a year after he tore his left Achilles tendon, an injury that took place when he was with the New Orleans Pelicans.

"I told myself coming in that I would go with flow and try to make the right plays," Cousins said.

"It felt great to be out there. It has been a long journey. There were a lot of dark days, good days, but this is where my passion is."

Curry finished with a team high 28 points and Kevin Durant tallied 24 as the two-time defending league champion Warriors took over the game in the third quarter.

The temperamental Cousins left the game at 8:51 of the fourth in what was the quickest foul out of his career. He has now fouled out 50 times, more than double any other player since he joined the league in 2010-11.

The Warriors are hopeful that Cousins will have an immediate impact, but management is also looking to see if he will be able to fit in around a bevy of all-star players.

Coach Steve Kerr said he is willing to be patient with Cousins' return.

"This is about him getting confidence, getting on the floor. It takes a long time to come back from an injury. This is just the first game," Kerr said.

Elsewhere, D'Angelo Russell drained a clutch three pointer with 27 seconds remaining as the Brooklyn Nets rallied from a 21-point deficit to defeat the Orlando Magic 117-115.

Russell equalled his career high total with 40 points and his three pointer gave them the lead for the first time since they opened the scoring with the first basket of the contest.

"We've got a great group of guys with the same goals and that's what we're starting to notice," said Russell. "We're all buying in and we're all hanging on each other's success. It's a great feeling."

Spencer Dinwiddie scored 18 of his 20 points in the second half for Brooklyn, who posted their 16th win in the last 24 games.

The Nets made 19 free throws compared to just 10 for the Magic.

Aaron Gordon scored 23 points, Nikola Vucevic finished with 16 points and 17 rebounds for Orlando, who have lost six of eight.

After Russell hit his key three, the Nets held onto their slim two-point lead when both teams missed free throws.

Orlando's Evan Fournier missed a shot in the lane that would have tied it for Orlando allowing the Nets to sneak off with the win.

"It's not every day you see a team coming back from 21 points down," said Jarrett Allen. "When you start winning games like this, it definitely changes your personality."

In Minneapolis, head coach Gregg Popovich recorded his 520th win on the road as the San Antonio Spurs continued their dominance over the Minnesota Timberwolves with a 116-113 victory.

Popovich's victory ties him with Pat Riley for the most on the road by a coach in league history.

LaMarcus Aldridge scored 25 points, Rudy Gay added 22 and the San Antonio Spurs held on to win their 16th game in the past 18 against the Timberwolves.

Marco Belinelli added 19 points off the bench for San Antonio, who were playing without leading scorer DeMar DeRozan because of left ankle soreness.

In Boston, Kyrie Irving led by example, scoring 20 of his 38 points in the third quarter as his Boston Celtics defeated the Memphis Grizzlies 122-116.

Irving, coming off a 27-point, 18-assist performance in a win over the Toronto Raptors on Wednesday, added 11 assists and seven rebounds as the Celtics won their second straight in the wake of a three-game skid.

Over his last two games, Irving has averaged 32.5 points on 62.5 percent shooting.