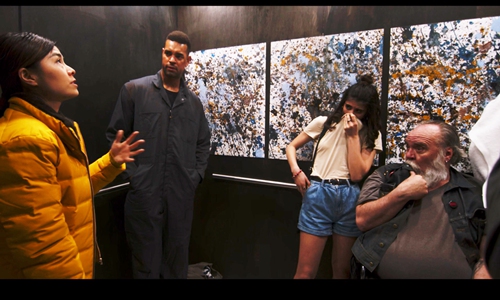 The thriller film Corona, which takes the on-going COVID-19 pandemic as its theme, focuses its lens on the rise in racial discrimination toward Chinese people due to the virus.

"This virus doesn't belong to any particular race, therefore we must fight it together as a human race," the film's director Mostafa Keshvari told the Global Times when talking about the message the film seeks to portray.

"We all are human and let's not judge a person by the color of their skin but by their character and actions. The virus does not discriminate, so why should we?" the Persian-Canadian director added.

The core of the film takes place in an elevator in an apartment complex in Canada. A rumor that someone in the building has the novel coronavirus has been spreading throughout the residential building and when neighbors see a Chinese woman enter their elevator, they suspect that she is the virus carrier and mistreat her.

When they get stuck in the elevator with the woman, their fear begins to spread faster than the virus and "people's true colors come out," Keshvari explained.

The first trailer of the film sees a Chinese woman in a yellow coat try her best to explain things to her neighbors, but it seems her defense fails to remove their doubts.

According to Keshvari, editing on the film, which began and completed shooting in Vancouver in February, has already been completed.

Keshvari was in an elevator in early January while reading about racist attacks on Chinese tourists so he decided to set the film in an elevator.

"The elevator actually became the symbol of the world where we all share the same space and coronavirus became the metaphor for xenophobia," the director said.

Keshvari said that he thinks shooting a film with such a theme and focus was the right thing to do as a human being because of people all experience suffering, pain, love and compassion in the same way regardless of race, religion or nationality.

He shared an 800-year-old Persian poem that he feels encapsulates his feelings about what people should do in the face of the pandemic: "Human beings are members of a whole, in the creation of one essence and soul. If one member is afflicted with pain, other members uneasy will remain. If you've no sympathy for human pain, the name of human you cannot retain!"

Racism toward Chinese has been on the rise since the outbreak first began. Some netizens outside of China have blamed the coronavirus on the Chinese people and US President Donald Trump had even used the racist term "China virus," which has increased hostility toward Asians and Chinese in particular.

Keshvari said racial discrimination cannot do anything to help eliminate the virus or save human beings.

"I think one thing the virus has taught us is to be humble. The virus treats everyone the same regardless of their race, status, color or religion," he said.

Many doctors, nurses and people at the frontlines of the fight against the COVID-19 pandemic are ethnic Chinese, and Keshvari called on people from all over the globe to battle together to achieve victory.

The director also had a message for Chinese: "I would want to say I hope they are safe wherever they are and to stay strong during these hard times. As the Chinese poet Dufu said, 'This morning's scene is good and fine, Long rain has not harmed the land.'"

To heighten the sense of realism, the entire movie was shot in one take. The director said he thinks this will make audiences feel like they are also in the elevator with the characters. He also noted that most of the dialogue was improvised to allow the actors to reveal the true feelings of the characters.

The production team took almost 70 takes to get things right.

"The idea came to me in mid-January and we finished shooting in mid-February. I wrote, directed and produced the film which gave me good creative control," Keshvari said.

Since filming, the pandemic situation has worsened around the globe. The director, who also lives in Vancouver, is currently in self-isolation. He said he has been spending more time inside than outside, contemplating life and writing his next film and a book of poetry.

"We are hoping to donate part of Corona's sales in China to charities in Canada to get needed medical supplies," he said.

The director said his next film will be a thriller focused on women's rights and will star a Chinese actress in the lead role.