Crafts can help refugees find community, and maybe a living 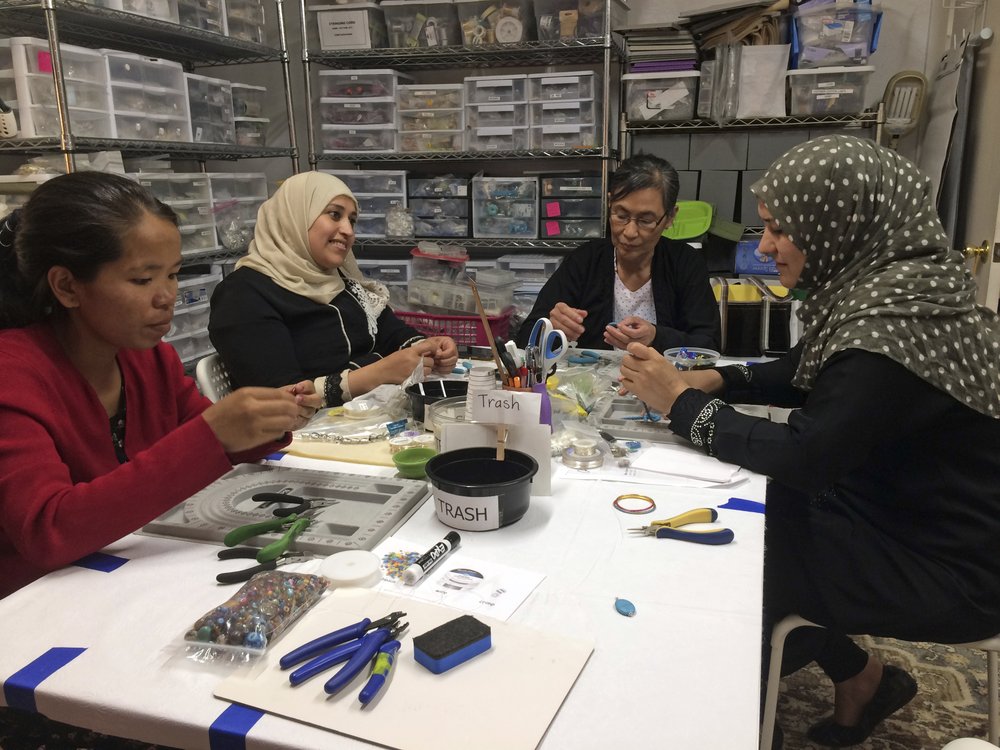 This May 15, 2019 photo shows A Little Something participants Khei Hung from Burma, left, Sabah Almobarak from Syria, Eh Gay Ju from Burma, and Mounira Kuru from Syria, as they work through frustration and creative challenges in their first lesson making wire-wrapped necklace pendants in Aurora, Colo. (Photo: AP)

When Bahija Karim arrived in Idaho as an Afghan refugee in 2005, she knew little about American culture. She didn’t speak English. A volunteer directed her to Artisans for Hope, a local crafts initiative for refugees.

There, she was taught crafting skills and English. Artisans for Hope took Karim on field trips. They found her a job with a seamstress, which she held for nine years, and then they helped her start her own custom drapery business, The Golden Needle.

Karim says Artisans for Hope helped her feel like an empowered member of her new community. With their help, she says, “all the people know we are human beings. We could make something for ourselves, for them, for the country, for the community.”

Around the world, crafting is being used as a tool to help refugees — and especially women — get acclimated to a host country, learn skills and, sometimes, earn a living.

“We provide a venue for refugee women to craft together, build a community, make some friends, and have a safe way to interact with each other and talk about what they’ve been through,” says Sharon McCreary, who in 2007 helped found A Little Something, a women’s refugee crafts organization in Denver.

A Little Something also sells the crafts and gives artisans 75% of the earnings.

In Paris, the Agency of Artists in Exile (aa-e) supports professional artists — from painters to photographers to dancers to musicians — who come to France as refugees. Founded in 2017 by Judith Depaule and Ariel Cypel, the group works with about 200 artists from 45 different countries, many of them seeking political asylum. The organization hosts a festival, provides workspace, offers French classes, and helps artists find grants, residencies, and jobs. If they need lawyers, psychiatrists or accommodations, aa-e helps find those too.

“When you get to a country in the way of exile,” Depaule says, “you can have a lot of bad experiences, very hard, very traumatizing experiences. And when you are waiting for papers it’s very hard, too. Because you don’t know if they will say yes or not, so (art) is a possibility to start to build something, and to start thinking about something else.”

The United Nations High Commissioner for Refugees also runs a craft-based initiative, Made51. It partners with local groups around the world to help artisan refugees connect to markets where they can sell their products.

Made51’s Global Manager Heidi Christ says that after forming a successful partnership with Virgin Megastores in the United Arab Emirates, the Made51 team is now working to expand and grow its direct-to-consumer market.

“We see lots of possibilities,” Christ says. “People love the storytelling behind Made51, love the idea of being able to buy from refugees in many different countries and do it in a way that also supports local business growth in these developing countries.”

She hopes a ripple effect of Made51 will be to shift people’s perception of refugees.

“Despite the conditions that a refugee artisan is living in, they’re able to make this beautiful product,” she says, “And then the way the consumer can think about refugees changes.”

Depaule, too, hopes to change attitudes, aiming to hold more aa-e festivals in countries where taking in refugees is controversial.

And back in Idaho, Artisans for Hope worked to change hearts and minds through a traveling quilt project. In partnership with the Idaho Commission on the Arts, the artisans created story quilts and traveled around Idaho, Oregon, and Utah to display them.

“It was for me a very good experience,” says quilt project participant Wafaa Alwan, “because I was seeing support from people.” Alwan came to the United States from Iraq and was connected to Artisans for Hope after opening up to a friend about struggling with homesickness.

“It’s not just a center for crafting,” she says. “It’s a healing center for us. It’s really a second chance for refugee ladies to find a place to live and prosper in the community.”