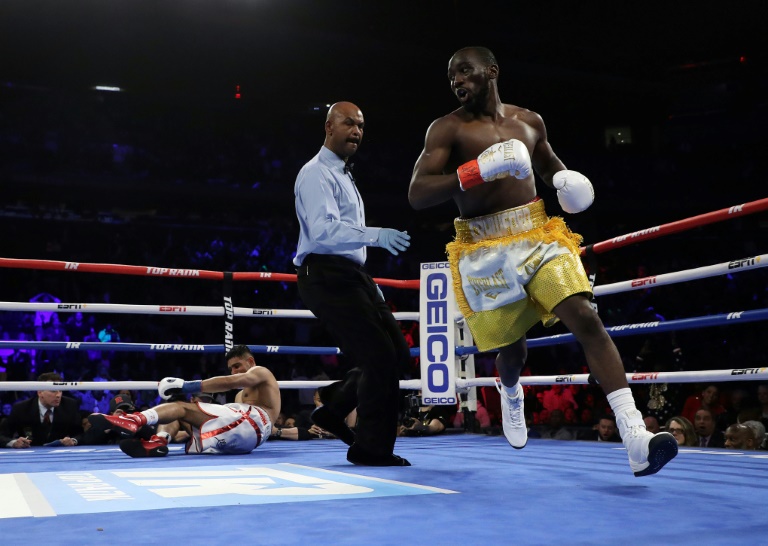 American Terence Crawford retained his WBO welterweight title Saturday, stopping Amir Khan in the sixth round when the Englishman was unable to continue because of an accidental low blow.

Crawford, who was making the second defense of his title, had little trouble controlling the fight and winning by a technical knockout against the overmatched Khan.

Crawford has now won nine of his last 11 fights by stoppage and Saturday's surprise ending happened after he hit Khan with a hard left to the groin 47 seconds into the sixth round at Madison Square Garden in New York.

Khan buckled and was in obvious pain as he went over to his corner. During the injury stoppage, Khan's trainer Virgil Hunter asked his boxer if he wanted to continue and Khan said no. Khan could have taken a five-minute break to regain his composure but chose not to.

Crawford denied it was a low blow but the referee saw it differently.

"It wasn't a low blow," Crawford said. "I was rushing a little. Trying to box more and catch him in the trenches."

Crawford, who is considered one of the best pound-for-pound fighters in the world, sent Khan to the canvas in the first round with an overhand right followed by a left to the temple. He delivered a similar overhand punch in the last 10 seconds of the round which wobbled Khan's legs again.

The next couple of rounds saw the 146-pound Crawford throwing almost all his punches at Khan's head. By the fourth round, Crawford was in complete control and Khan's swollen face was showing the marks of getting hit with clean punches.

Crawford started going to the body in the fourth and in the fifth he got his jab working again, popping Khan's head back with a series of quick shots.

"The only one fight they are talking about is Spence. Whenever he is ready, I am here," said Crawford. "The only thing I can do is fight (the) person they put in front of me. We are going to make it happen, sooner or later."

Khan defended his decision to not continue or take the full five minutes of the time out.

"I am a warrior," he said. "I would never give up in a fight like this.

"I was in pain. I could feel it in my stomach. My legs seized. I couldn't continue. You have to knock me out for me to give up."

For Khan, the 2004 Olympic silver medallist, it was another disappointing world title fight. He is 2-2 in his last four fights.

Three years ago, he was brutally knocked out by Canelo Alvarez in a middleweight title fight. Saturday's fight dropped his record in world title fights to 6-4 overall.