CULTURE Crazy in love? The Japanese man 'married' to a hologram

Crazy in love? The Japanese man 'married' to a hologram

Akihiko Kondo's mother refused an invitation to her only son's wedding in Tokyo this month, but perhaps that isn't such a surprise: he was marrying a hologram. 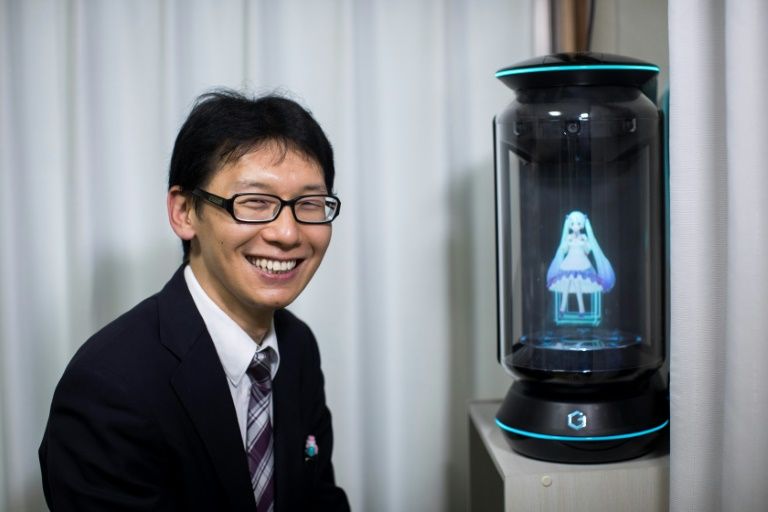 None of Akihiko Kondo's relatives attended his wedding to a hologram of virtual reality singer Hatsune Miku (Photos: AFP)

"For mother, it wasn't something to celebrate," said the soft-spoken 35-year-old, whose "bride" is a virtual reality singer named Hatsune Miku.

In fact, none of Kondo's relatives attended his wedding to Miku -- an animated 16-year-old with saucer eyes and lengthy aquamarine pigtails -- but that didn't stop him from spending two million yen ($17,600) on a formal ceremony at a Tokyo hall.

Around 40 guests watched as he tied the knot with Miku, present in the form of a cat-sized stuffed doll.

"I never cheated on her, I've always been in love with Miku-san," he said, using a honorific that is commonly employed in Japan, even by friends.

"I've been thinking about her every day," he told AFP a week after the wedding.

Since March, Kondo has been living with a moving, talking hologram of Miku that floats in a $2,800 desktop device.

"I'm in love with the whole concept of Hatsune Miku but I got married to the Miku of my house," he said, looking at the blue image glowing in a capsule. 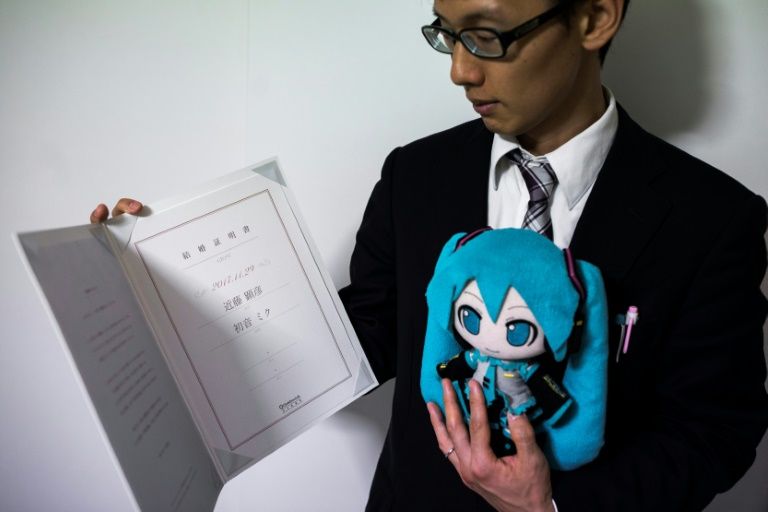 Kondo's marriage to Miku may not have any legal standing, but that doesn't bother him

He considers himself an ordinary married man -- his holographic wife wakes him up each morning and sends him off to his job as an administrator at a school.

In the evening, when he tells her by cellphone that he's coming home, she turns on the lights. Later, she tells him when it's time to go to bed.

He sleeps alongside the doll version of her that attended the wedding, complete with a wedding ring that fits around her left wrist.

Kondo's marriage might not have any legal standing, but that doesn't bother him. He even took his Miku doll to a jewellery shop to get the ring.

And Gatebox, the company that produces the hologram device featuring Miku, has issued a "marriage certificate", which certifies that a human and a virtual character have wed "beyond dimensions".

Kondo's not alone either: he says Gatebox has issued more than 3,700 certificates for "cross-dimension" marriages and some people have sent him supportive messages.

"There must be some people who can't come forward and say they want to hold a wedding. I want to give them a supportive push," he says.

Kondo's path to Miku came after difficult encounters with women as an anime-mad teenager.

"Girls would say 'Drop dead, creepy otaku!'," he recalled, using a Japanese term for geeks that can carry a negative connotation.

As he got older, he says a woman at a previous workplace bullied him into a nervous breakdown and he became determined never to marry.

In Japan, that wouldn't be entirely unusual nowadays. While in 1980, only one in 50 men had never married by the age of 50, that figure is now one in four.

But eventually Kondo realised he had been in love with Miku for more than a decade and decided to marry her. 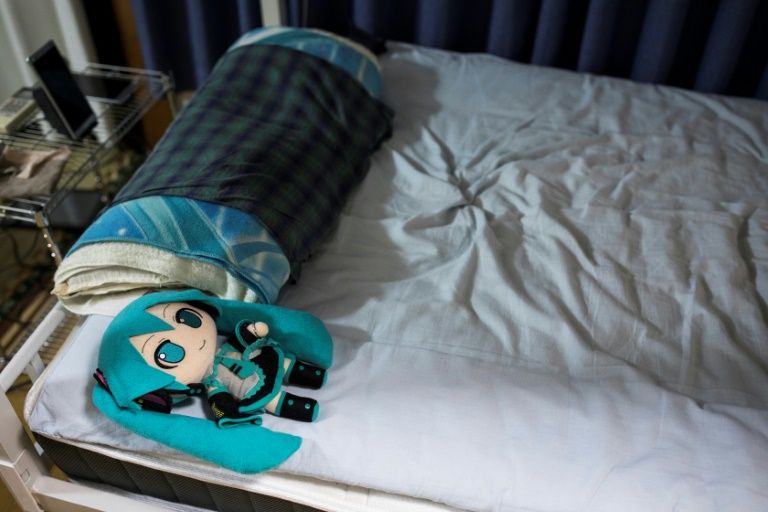 Kondo sleeps alongside a doll version of Miku, complete with a wedding ring

"Miku-san is the woman I love a lot and also the one who saved me," he said.

And while Kondo says he is happy to be friends with a "3D woman", he has no interest in romance with one, no matter how much his mother pushes for it.

Two-dimensional characters can't cheat, age or die, he points out.

"I'm not seeking these in real women. It's impossible."

Even in a country obsessed with anime, Kondo's wedding shocked many. But he wants to be recognised as a "sexual minority" who can't imagine dating a flesh-and-blood woman.

"It's simply not right, it's as if you were trying to talk a gay man into dating a woman, or a lesbian into a relationship with a man."

"Diversity in society has been long called for," he added.

"It won't necessarily make you happy to be bound to the 'template' of happiness in which a man and woman marry and bear children."