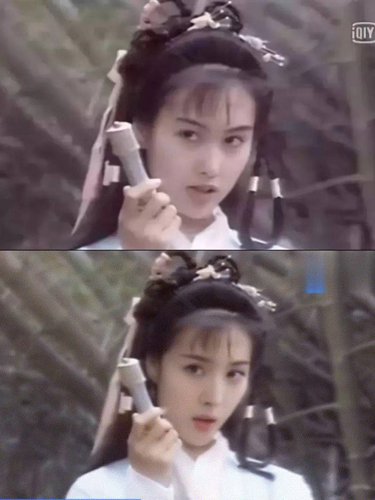 A face-stitching technology based on AI that is used to produce so-called deepfake videos involving celebrities has caused concern in China, with some urging that regulations are needed to prevent the spread of these exploitative videos. Two videos that spliced the face of  Chinese star Yang Mi onto the face Hong Kong star Athena Chu in clips from the 1994 TV series The Legend of the Condor Heroes have gone viral, with millions of views as of press time, and the topic is trending on social media. The videos were made and posted on Sina Weibo by a man surnamed Xiao, whose online name is "Huanliange," which means "brother of face-changing" in English.  The video was slammed by netizens, who accused Xiao of disrespecting both actresses and of violating Yang's image rights.  Xiao apologized on Wednesday on Sina Weibo, saying "My initial intention was to help more people hear about this technology and protect celebrities from videos of forged, negative content." He said that he had no intention of profiting from the video. He later deleted the clips. Many have expressed concern that this deepfake technology could be used maliciously. There have been previous cases where the images of Hollywood A-listers, such as Wonder Woman actor Gal Gadot and Harry Potter star Emma Watson were spliced into pornographic content.  "It's too horrible! If face-swap videos are used in crimes, how to recognize it's fake?" wrote a netizen called "seaosky." "There'd be chaos as famous faces suddenly appear in an unlikely sex tape, which would violate their reputation," wrote "Qingyuanwupeng," whose sentiments represented the views of many other Chinese commentators.This deepfake technology is not new and has become easier for the public to access, Zhu Wei, a communication and legal analyst, told the Global Times on Thursday. "The technology itself is neutral and should not be banned as it depends on how people use it," Zhu said.However, Li Yi, a senior research fellow at the Internet Research Center affiliated to the Shanghai Academy of Social Sciences, urged that the law should be updated. "As deepfake technology becomes well known in China, there will be more doctored videos. In that case, the authorities should think about how to protect the rights of those whose image has been swapped and how to ban illegal internet behavior," Li said. "No need to panic," said Zhu, noting that all actions on the internet can be tracked to tell if a video is fake or not.