Cross-dressing sensation marches on despite controversies 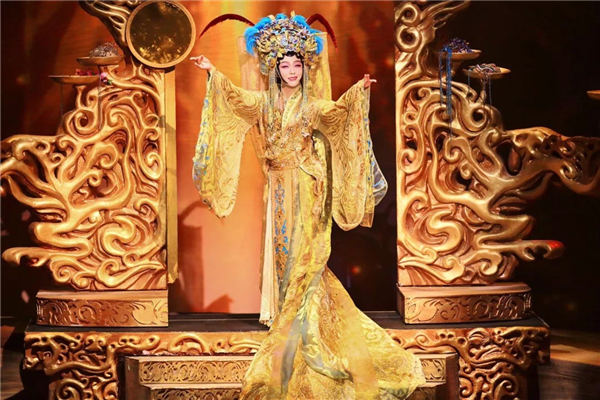 Chinese pop singer Li Yugang, who is known for his cross-dressing performances, has launched a global tour of his dance drama, Lady Zhaojun, based on the story of Wang Zhaojun, an ancient Chinese beauty from the Han Dynasty (206 BC-AD 220). (Photo provided to China Daily)

Clad in a long red cape and white robe, Chinese singer Li Yugang showed up at a five-star hotel in downtown Beijing recently. With delicate makeup and his short hair neatly combed back, he walked onto the stage, holding a traditional Chinese musical instrument, pipa, a four-stringed, pear-shaped lute.

He was ready to showcase the classic image of Wang Zhaojun, an ancient Chinese beauty from the Han Dynasty (206 BC-AD 220).

The 40-year-old singer has come a long way since the day he made a name for himself through his unique cross-dressing performances. Now, he is known for playing female roles and his performances combine traditional Peking Opera and pop music.

In his upcoming dance drama, Lady Zhaojun, Li will portray the legendary beauty, who volunteered to marry the ruler of a powerful nomadic group known as the Xiongnu on the then-border of northern China, in exchange for peaceful relations with the Han Dynasty.

As part of the ongoing 19th Meet in Beijing Arts Festival, the capital's largest annual celebration of dance, music, drama and art, Lady Zhaojun will be staged from Friday to Wednesday at the Tianqiao Performing Arts Center. It will then tour internationally this year, going to the United States, Canada and countries involved in the Belt and Road Initiative, including Thailand and Singapore, according to Wang Xiuqin, general manager of the China Arts and Entertainment Group, the festival's organizer.

"Wang Zhaojun is known as one of the four legendary beauties of ancient China. She is also regarded as a symbol of peace and for bridging cultures," says Li. "The dance drama combines traditional Chinese music and dancing. And when it is staged abroad, I believe it will help the audience get closer to Chinese culture."

D'Alema, who will be attending the ongoing second Belt and Road Forum for International Cooperation in Beijing, also invited Li to bring the dance drama, Lady Zhaojun, to Italy next year, since 2020 marks the 50th anniversary of Sino-Italian diplomatic relations.

Lady Zhaojun premiered in Beijing with four shows in 2015, with Li as both the lead actor and the director.

The creative team includes renowned Taiwan songwriter Vincent Fang and designer Tim Yip, the winner of the Oscar for best art direction and costume design in 2000 for his collaboration with director Ang Lee on Crouching Tiger, Hidden Dragon. 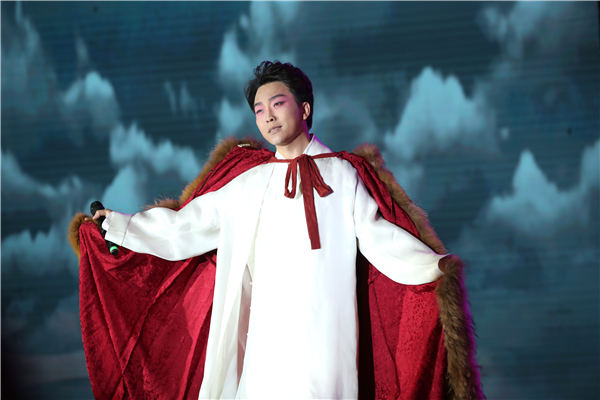 Chinese pop singer Li Yugang, who is known for his cross-dressing performances, has launched a global tour of his dance drama, Lady Zhaojun, based on the story of Wang Zhaojun, an ancient Chinese beauty from the Han Dynasty (206 BC-AD 220). (Photo: Zou Hong/China Daily)

In the new version of the dance drama, Li will work with Max Lee from Taiwan's GuoGuang Opera Company, who will be the director.

The updated version will also see Li perform about 30 original songs and dances using Peking Opera techniques, such as shuixiu, or "water sleeves".

The role of Wang is one of Li's favorites. He played Wang in his 2010 dance drama, Flower in Mirror, Moon in Water. In 2011, he played the role again in his dance drama, The Painting of Four Beauties. But it was not until 2013 that he decided to do a show about Wang, who he feels a strong connection with.

Li spent about a month traveling from Beijing to the site in Inner Mongolia autonomous region where Wang was buried, following in her footsteps to get inspiration for the role.

"She left her hometown and never returned. Somehow I share the same loneliness and homesickness as her," he says.

Li was born in a small, remote village in Northeast China's Jilin province, was introduced to music by his mother, an actress who practiced errenzhuan, a form of folk song and dance duets from Northeast China.

Li dropped out of school in 1996 because his family was too poor to afford the fees. And to make a living, he left his hometown and worked as a waiter and singer at bars in nearby cities.

Then, one night, thanks to his wide vocal range, he was able to substitute for a female singer who was absent for a show. He sang both the male and the female parts, which let him discover his talent for cross-dressing performance.

Later, Li started incorporating the art of nandan from Peking Opera into his performances. Nandan, or men playing female roles, was a practice forged at a time when women were forbidden from public performances.

One of the best known nandan artists was Peking Opera master Mei Lanfang (1894-1961).

In 2009, he held his first solo concert at Sydney Opera House in Australia. In the same year, he joined the China National Opera and Dance Drama Theater.

But despite his popularity, Li has also faced criticism.

Some questioned his professionalism in performing the ancient art form of nandan, and his family once doubted him as they could not understand why their son performed as a woman onstage.

Despite of the controversies, Li has kept on pushing boundaries by releasing albums and performing in stage productions.

"During the past two years, I have constantly traveled abroad and performed for different audiences. Both the foreign audiences and the overseas Chinese appreciate the traditional Chinese art. And it really gives me the confidence to dream bigger," he says.