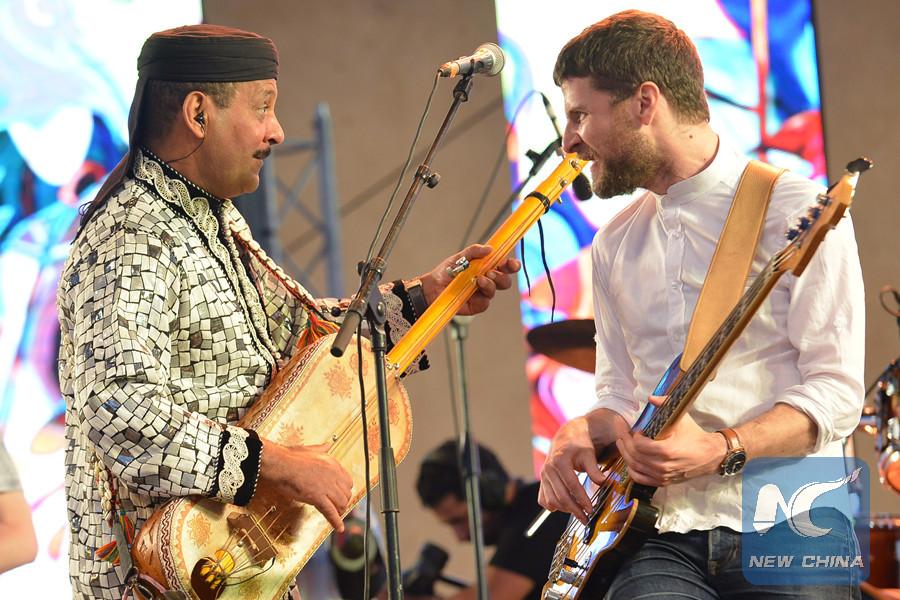 Artists perform during the opening of the 21th edition of the Gnaoua World Music Festival, in Essaouira, Morocco, on June 21, 2018. (Xinhua/Aissa)

As the sun sets, warm sea breeze from the Atlantic Ocean passes through the walls built in the 18th century. Thousands of music lovers gather at the esplanade in Essaouira, enjoying the opening of the 21th edition of the Gnaoua World musical Festival.

The annual music event invited some 300 artists from all over the world to present more than 30 different styles of concerts in Essaouira, a famous tourist city in western Morocco, which is also known as the "Wind City" for its stable trade winds throughout the year.

Gnaoua music mixes classical Islamic Sufism with pre-Islamic African traditions. The main instrument used is the double-headed cymbal with a dumbbell, which provided continuous stable rhythm for the entire performance.

In Moroccan popular culture, Gnaoua people, through their ceremonies, are considered to be experts in the magical treatment of scorpion stings and psychic disorders.

Karim Ziad, artistic director of the festival, told Xinhua that in history, Essaouira, as an important trading center, had frequent trade relations with Timbuktu in West Africa. Gnaoua music was brought to Moroccan with caravans of West Africa.

Ziad said the uniqueness of the Gnaoua World Music Festival is that it succeeded in inheriting Moroccan and African traditional music and combining them with popular music such as jazz to make them more easily accepted by modern people.

Due to similar duration and number of participants as the famous Woodstock Music Festival, the Gnaoua World Music Festival has also been hailed as "Woodstock in Africa" by some media. By the estimation of organizers, the three-day festival will attract more than 250,000 music lovers from all over the world.

Among the audience attending the festival, there are many backpackers who choose to camp. A young couple from Germany, Dora and Paul, are excited about the festival. "We're going to spend the night at campsites 5 km away from the music festival. Starting from Woodstock, camping and music are the perfect match."

Dora and Paul said this was their first time attending music festival in Essaouira. In addition to enjoying the beautiful sea view of Essaouira, they hope to fully enjoy the joy of the "Woodstock in Africa."

Trying not to miss the grand music event, Jonathan, a tourist from Denmark, changed his trip agenda in Morocco. "All my friends in Morocco have recommended this festival to me, so I will stay in Essaouira for two more nights. I think it is a good idea to feel the music beats on a coastal city like Essaouira."

Mohammed, manager of a cafe in the old city of Essaouira, told Xinhua that Essaouira is favored by tourists for its long history and extraordinary sea view.

"Although Essaouira is constantly visited by tourists through the year, the time of Gnaoua Festival is the most lively period here."