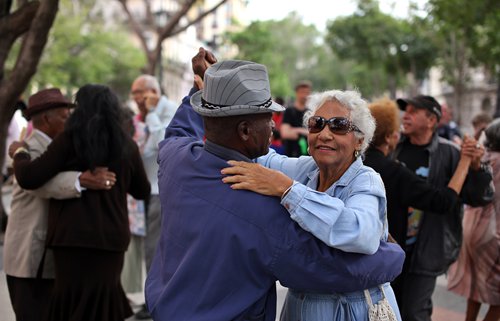 Glowing in a yellow lace dress, Carolina Salinas fans herself languidly while the band burns through the sultry rhythms of the "danzon," Cuba's national dance.But this is no Havana night club. In fact, danzon has virtually vanished from Cuba. Today, it is being kept alive thanks largely to a passionate group of Mexican fans like Salinas.Danzon, a music and dance style blending European and African influences, was born in Cuba in the 19th century.Its birthday is often given as January 1, 1879 - the date of a New Year's concert where Cuban composer Miguel Failde premiered a new song, "Las Alturas de Simpson," that took the traditional French contredanse and injected it with spicy Latin beats.The dance that grew up around this new genre is characterized by upright posture, swaying steps and repeating refrains during which the couples strut arm in arm or the women fan themselves coquettishly.In the Mexican port of Veracruz, across the Gulf of Mexico from Cuba, couples gather four times a week to dance danzon, twirling around the central square in fedoras and evening gowns that evoke a bygone era."In danzon they teach you that image and posture are important for both the lady and the gentleman. Elegance, that's danzon," said Salinas, a 26-year-old teacher, her hair and make-up impeccable as she fanned herself during the "rest period" of the refrain.Mexicans have breathed new life into the tradition even as it has faded in Cuba."If Mexico hadn't adopted danzon as an important part of its popular culture, it would have disappeared," said Miguel Zamudio, director of the National Center for Research and Promotion of Danzon, based in Veracruz. 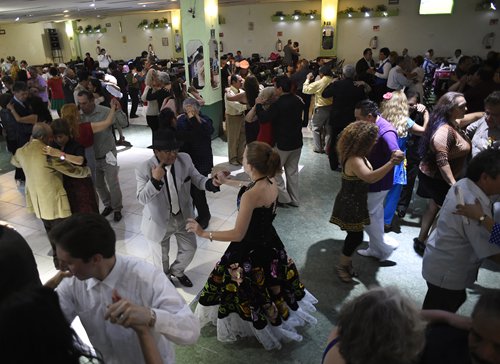 Cultural importDanzon arrived in Mexico soon after it was born, traveling first to the Yucatan peninsula, then Veracruz. Eventually it reached Mexico City, where it leapt to fame after featuring in a series of Mexican movies in the 1940s.The genre took on a life of its own in Mexico, whose musicians added many classics to the danzon canon. They include Danzon No.2, by the composer Arturo Marquez, a piece of music that has been performed by some of the top symphonies around the globe.The dance continues to develop in different ways across Mexico."In Veracruz they've kept alive a performance and dance style that is similar to the Cuban original, while in Mexico City danzon has blended with other genres and evolved," Zamudio told AFP.In the capital, danzon lovers have made it their own, incorporating acrobatic turns and moves. But one constant that always remains is the "rest" during the refrains."There are many legends about the rest: That it's when couples fall in love, that Cubans used it to pass on information about the revolution," said Zamudio.When I'm 92After the 1959 revolution, danzon began a long decline in Cuba.But an aging handful of die-hard aficionados keep the flame burning.Ninety-two-year-old Oscar "The Prof" Penader is one of them.He still shows up regularly in a crisp suit and tie to dance at the Orange Creek Club, on the south side of Havana, where there are dances two Sundays a month.Penader laments that most of the songs are trendy salsa numbers, instead of danzon.Interest in danzon "has declined a lot," he said."If we don't keep it going, it will be a pity. We can't just talk about it, we need groups that practice it, and bands that play it well," he said.When the band does play danzon, he tosses away his cane and takes to the dance floor."The music carries me," he said. "I feel it in my bones, in my soul."His fellow fans include Lazara Genes, 74, and Claudio Hernandez, 73, who met at the club 15 years ago - the start of a love affair for the two widowers."He started flirting with me, very discreetly," said Genes.It also turned out to be the start of a prize-winning run as dance partners that has seen the couple win danzon championships.A younger Cuban hoping to keep danzon alive is Ethiel Fernandez Failde, the 25-year-old great-great-grandson of the genre's founding father.Himself a musician, Fernandez Failde has a danzon band and promotes an annual festival celebrating the genre in the city of Matanzas.He hopes to see his reggaeton-obsessed generation rediscover danzon."In Mexico, they dance danzon every day, there's a youthful movement around it," he said."In Cuba, we don't have that anymore."