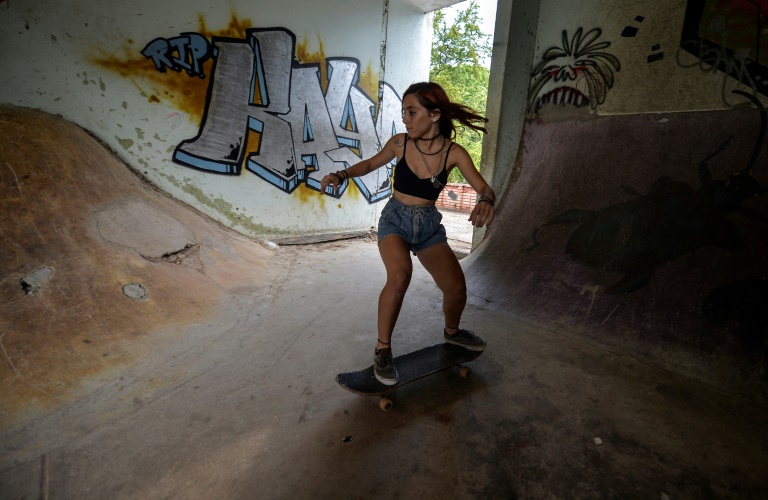 Skateboarders in Cuba are hoping that the sport's appearance at Tokyo 2020 will encourage the government to recognise the sport. (Photo: AFP)

After years in the shadows, with neither means nor official recognition, Cuban skateboarders are hoping that their sport will finally be accepted at home when it becomes an Olympic event in Tokyo next year.

"In 2020, skateboard is going to the Olympics in Japan and that is motivating us to find ways to improve and perhaps it will encourage the government to take a little more interest in us," says 28-year-old Ariel Gomez, who trains in the homemade skatepark of Ciudad Libertad, in the west of Havana.

It is here that Gomez regularly helps learner skateboarders with the objective that "this sport grows in Cuba".

There are hundreds of skateboard devotees in Cuba but officially the sport doesn't exist on the island -- there is no federation, no trainers, no dedicated spaces to practice.

That makes it impossible for Cuban skateboarders to take part in qualifying events for Tokyo 2020, some of which will be in Los Angeles from July 23 to 28.

"We have tried many times to talk with the government, to include us in INDER (the National Institute of Sport, Physical Education and Recreation) to see if they will give us a space but they never wanted to," says Gomez.

This non-recognition brings other obstacles, notably the cost.

In a country where the average monthly salary is around US$50, there is no shop to buy skateboard material while prices can be high on the black market -- a skateboard costs between 50 and 100 dollars.

Che Alejandro Pando remembers when things were even more difficult.

A pioneer of skateboarding in Cuba, Pando began at the start of the 1980s, a decade after the sport hit the streets of California and at a time when the United States were seen as an "imperialist enemy" by the regime of Fidel Castro.

"We had to make our own skateboards," says Pando, a 46-year-old tattoo artist.

"For the wheels we had to be a bit inventive, work out how you could fashion them from, say, the blades of a Russian food mixer."

Desperate over the lack of equipment, Gomez opted for a new tactic in 2010.

"We started to film ourselves and post the videos on the internet. We said we needed help and asked if anyone might be able to bring us some things," he says.

His message got through to the global skateboarding community and skateboarders began to arrive from South America, Europe and the US.

Since then everything has worked on donations. "We even received financial aid," says Gomez.

That money has paid for the construction of a skatepark in an abandoned building in Ciudad Libertad, a former military garrison converted into a school after the Castro revolution of 1959.

"We found this area abandoned, filled with rubbish," says Ariel. "We cleaned it up and started to build our own skateboard park."

On the smooth granite floor, skaters ride at high speed, using ramps, ledges and concrete obstacles to practice jumps and tricks. It is a homemade park which for the moment is tolerated by the authorities. But it is a different story elsewhere.

A tag on one of the walls of the skatepark illustrates the mood: "Fuck police," it reads in big red letters.

"We aren't allowed to skate in the road," says 19-year-old Paul Ortega. "They arrest us, take us to the police station and fine us."

Meanwhile, skateboard devotees in Cuba are hoping that the Tokyo Olympic will change a few minds, that the authorities in Cuba will recognise it as a sport and that one day they will be able to compete for their country.