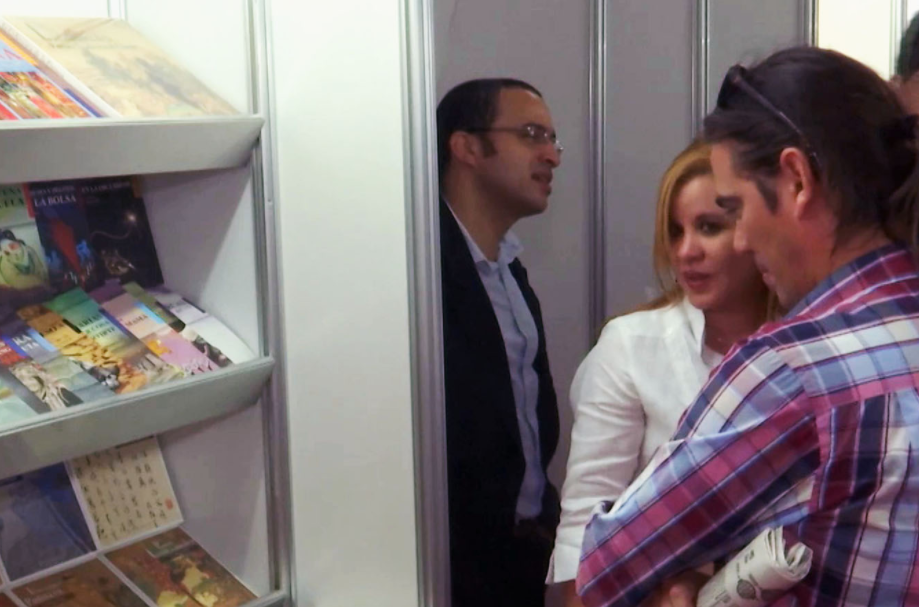 The 27th Havana International Book Fair is set to come to an end on Sunday. However, China's participation as the nation's guest of honor has left a great impression on Cubans who visited its pavilion to learn about its classic and contemporary literature and traditions.

Some locals have deeply appreciated the 3,000 titles of books in Mandarin, English and Spanish brought over by a delegation of 60 Chinese publishing houses while others formed long lines for volunteers to write their names or dates of birth in Chinese characters.

In the first few days, most books by Chinese authors, particularly novels and short stories, were already sold out and those who visited the fair afterwards left disappointed.

Some were unable to take home reproductions of traditional Chinese paintings printed on rice paper as they vanished within the first three days after the event opened to the public on Feb. 2.

Amidst the tumultuous event, the sharp and patient look of an old man in front of Cuban books translated into Chinese revealed the essence of the cultural exchange.

Luis Toledo, a Cuban author who wrote a biography of the island's national hero Jose Marti (1853-1895), found his text translated into Chinese.

"I came as I was interested in finding good anthologies and selections of novelists, poets and recent Chinese playwrights. But to my surprise and astonishment I see that my biography on Marti has been translated into Chinese," Toledo told Xinhua.

Several years ago, the Caribbean author visited Beijing to present the book but he never expected to see his work exhibited in Mandarin in Havana.

"That is the best thing about this event and we must preserve it as a genuine place for cultural encounters. This year, our people expanded their knowledge of Chinese culture, which for many has been a phenomenal discovery," he added.

The same opinion was shared with Xinhua by Marina Lee, for whom the literary event has a special meaning.

"As a Chinese descendent, it seems to me that I am seeing the memory of my father represented. The books are all very good and the organizers have made a great selection of titles which give us a broad perspective of China," she said.

For Lee, the quality of books on display has been extraordinary, although in some cases a bit expensive for the economic capacity of the average Cuban.

As part of their goodwill participation in the fair, Chinese publishers agreed to lower the prices of books, taking into account the economic situation on the island.

As of Saturday, almost all the texts in Spanish had been sold. Only some in English and Mandarin were left of the more than 7,000 books brought by the Chinese delegation to the fair.

The most popular books sold included Chinese language learning, martial arts, culture, the philosophy of Confucius and Mencius philosophy, Taichi and other health related texts, such as traditional Chinese medicine, Yu Xin, a volunteer at the China pavilion, told Xinhua.

According to Yu, Cubans frequently requested books on Chinese President Xi Jinping, particularly the two volumes of "Xi Jinping: The Governance of China."

"In recent years, there has been an expansion of Chinese culture in Cuba. But there is still much to know and as we learn more about their traditional and modern culture, mutual understanding will grow," Rolando Rodriguez, a participant in the fair, told Xinhua.

The young Cuban graphic designer believes China's publishing houses presented a small sample of their work but that Beijing's participation will grow to satisfy the most diverse interests.

"I haven't approached Chinese literature before and I have been impressed by everything I've seen," Rodriguez said.

Daniela Gregory, a student at Havana's Confucius Institute, wished that in upcoming events, China would present poetry books in both Mandarin and Spanish.

This wish was shared by other respondents, who hope that this year's edition of the book fair marks the beginning of a more dynamic and comprehensive literary collaboration.

"I really liked a book about a panda bear but I did not understand much because it was in Chinese. The panda bear is my favorite animal and that's why I would like to go to China and meet a real one," said Alain Fernandez, aged 10.

This is the first time China was awarded guest nation title at Havana Book Fair, and a large-scale cultural event in Latin America and the Caribbean.

A large delegation of 220 representatives of 60 well-known Chinese publishers, writers and intellectuals visited the island from Feb. 1 and exchanged with colleagues and the Cuban public during the 10-day literary event.