Cubans getting early taste of mobile internet in system test 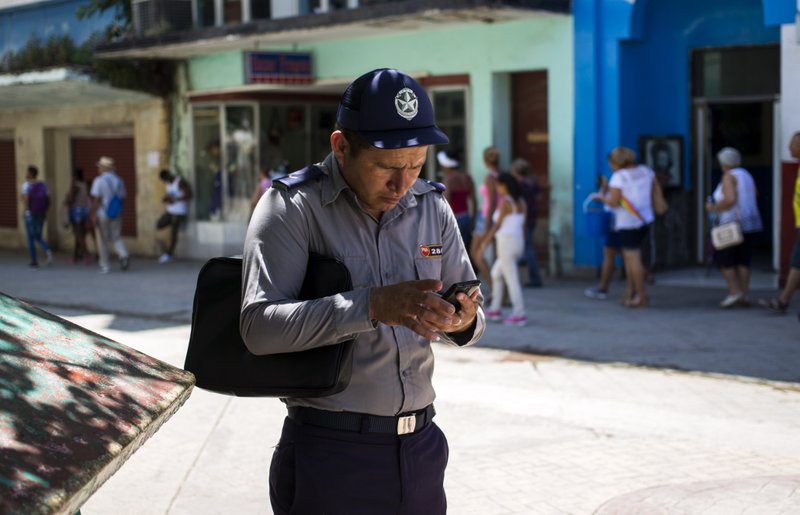 A policeman gets connected to the internet using his phone in Havana, Cuba, Wednesday, Aug. 22, 2018. (Photo: AP)

One of the world’s least-wired countries was a little more connected on Wednesday.

The state telecommunications company of Cuba launched the second, and most extensive, of two test runs of a mobile network that would give ordinary citizens greater access to the internet than has existed before on the island.

Service was to be free of charge from early in the morning until midnight as the company, known by its initials as ETECSA, tested the capacity of the system, which the government had previously said would be available this year.

People across Cuba said they were able to gain access, though others said they couldn’t get online or were able to do so only after repeated attempts because of an apparent flood of users.

Cubans like Isbel Ortiz, a 48-year-old resident of Havana who works as a government-approved tour organizer, said she would work and check Facebook and chat with her sister in the US from her phone instead of having to walk seven blocks to the nearest Wifi hotspot.

“This is a good work opportunity for me,” Ortiz said.

Student Marcos Marzo said he was able to get online while visiting a relative in the eastern city of Santiago de Cuba, using his phone to watch a Jennifer Lopez video on YouTube and chat with a friend in Costa Rica using WhatsApp.

“It was a very fluid connection with voice and video,” he said.

Cuba still lags behind the rest of the Western Hemisphere in internet connectivity, a legacy of government control of technology and communications that began to be eased under former President Raul Castro.

Public access to the internet in Cuba was limited to tourist hotels until 2013. The government has since authorized Wi-Fi hotspots and cybercafes. ETECSA conducted another recent system test for a shorter period.

The telecommunications company has previously said that its 5 million customers would have internet access this year but it has not announced a date. It also remains to be seen whether the network will be strong and open enough to amount to universal access, said Ted Henken, a sociologist and Cuba expert at New York University.

“Cuba is still in last place in the region (in terms of connectivity), though you have to admit it has been getting better,” Henken said.