Lang Jiaziyu, 25, is the third-generation inheritor of Dough Figurine Lang, a national intangible cultural heritage. In addition to using this ancient craft to make new figurines, he has also sought to make full use of new media channels such as short video and online streaming to promote the traditional skill. 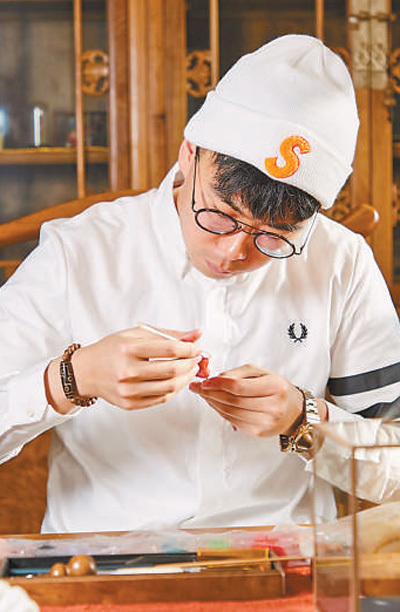 "The origins of dough figurines date as far back as the Han Dynasty. People turned leftover dough into ornamental figurines during festivals and gave them special meanings," Lang said, explaining the craft’s long history.

Also known as “glutinous rice figurines,” dough figurines, are a traditional Chinese art form in which wheat flour and glutinous rice flour are used as the main ingredients. The figures typically depict scenes from Chinese opera, books and daily life, or mythical characters from famous works.

Lang came into contact with dough figurines in June 2008 when he was just 13, and remembers being excited at the news of their inclusion in the second national intangible cultural heritage list.

When Lang was 16 years old, he was accepted as a prospective member of the Beijing Folk Artists Association, and became a full member at 18. Today, he is a postgraduate student at the School of Art, Peking University.

Lang has gained many fans through his short videos. He said his biggest dream is to become a craftsman and spread the art of making dough figurines through We media.

Lang said that through making short videos, he hopes to bring traditional dough figurines to more people's attention through familiar methods. "If we can get 100 people to know about it, 10 people to like it and one person to become good at it, then this skill will hopefully be passed down," he said.

"Today, the cultural and creative industry related to intangible cultural heritage has developed, but people's consumption habits for traditional arts and crafts have yet to be cultivated. It takes a long time for traditional culture to integrate into modern life, and our generation needs to keep working on it,” Lang said.

This year, Lang opened his own studio to further advance dough figurine culture. "I want to carry forward this fine traditional culture with the courageous spirit of young people," Lang said.