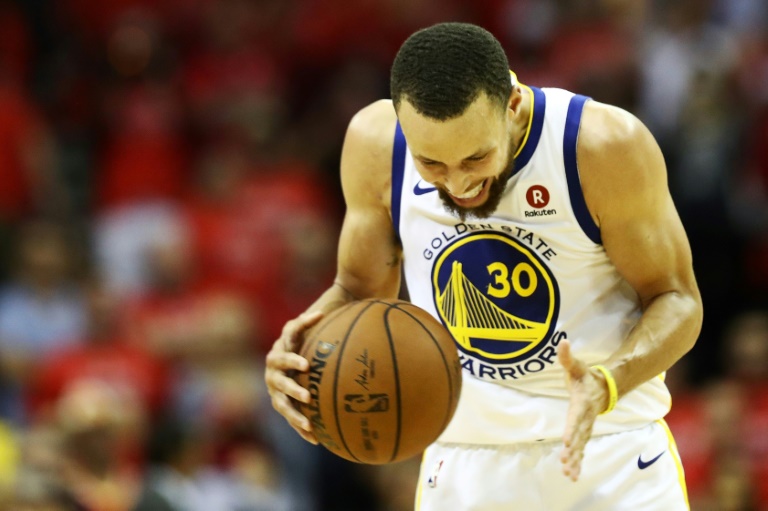 Stephen Curry scored 27 points as the Warriors beat Houston 101-92 to advance to an unprecedented fourth NBA Finals meeting in a row against the Cleveland Cavaliers.(Photo: AFP)

Stephen Curry inspired a second-half fightback as the reigning champion Golden State Warriors booked their fourth consecutive NBA finals appearance with a 101-92 victory over the Houston Rockets on Monday.

Curry scored 27 points with Kevin Durant adding 34 as the Warriors advanced to an unprecedented fourth NBA finals meeting in a row against LeBron James and the Cleveland Cavaliers.

The Warriors' Western Conference finals game seven victory in Houston handed them a 4-3 series win, and came after the Rockets had led by as many as 15 points in the first half.

The Warriors had looked vulnerable after a sluggish first-half performance that saw them trail 54-43 at half-time.

But just as they have done throughout the playoffs, the Warriors found an extra gear in the third period, with Curry and Durant suddenly finding their range from three-point distance to come roaring back into the contest.

"Basketball is a 48-minute game and no matter how badly we played, how many shots we missed, there's always time to turn it around," Curry said. "The second half was unbelievable. Happy to be back in the finals."

The Warriors outscored the Rockets by 33-15 in the third quarter, surging into a double-digit lead that they never looked like surrendering. 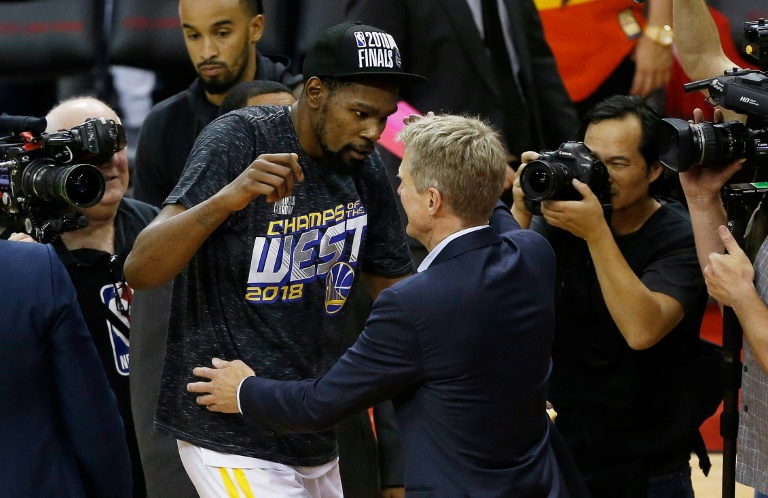 Kevin Durant and Steve Kerr of the Golden State Warriors celebrate after they defeated the Houston Rockets 101-92 in game seven of the Western Conference Finals.(Photo: AFP)

Rockets coach Mike D'Antoni meanwhile attempted to put a brave face on a loss which came after his team had battled into a 3-2 lead earlier in the series.

"I couldn't be prouder of our team," D'Antoni said. "There's no quit in them. We saw where the bar was this year, but we just couldn't quite get there.

"We'll take our summer off and then we'll try it again next season."

Rockets ace James Harden, who finished with 32 points, said his team's second-half performances in games six and seven had decided the fate of the series.

"One half of basketball. Two games, six and seven. We just didn't have the same energy that we had in the first half, the pace," Harden said. "It's extremely frustrating."

Earlier it looked as if Houston were ready to snap the Golden State-Cleveland monopoly, shrugging off the injury absence of Chris Paul to make a fast start.

The Rockets swarmed over the vaunted Warriors offense to keep the visitors firmly on the back foot.

The Warriors looked nervous from the outset, with a string of early mistakes that included two turnovers.

Durant missed three free throws in a row early on as Houston gradually pulled into a 24-19 first quarter lead.

A disgusted Kerr told a courtside television interviewer it was the "one of the worst quarters of basketball we've ever played."

The pressure continued in the second, with Clint Capela outstanding on defence for Houston with a string of rebounds.

The Rockets pulled away in the second, with Harden to the fore as the hosts moved 15 points clear with both Durant and Curry struggling from three-point range.

A miserable first half for Golden State saw Eric Gordon make it 54-43 on the stroke of half-time with an aggressive driving layup.

Yet Golden State flicked the switch after the break, and Curry and Durant soon began raining down buckets from distance.

A Durant three-pointer tied it at 61-61 and Curry then struck with a three of his own to give Warriors a 64-61 lead, the first time they had led since a fleeting 9-7 advantage early in the first.

Two more quick threes from Curry gave the Warriors a nine-point advantage at 72-63, and from their the NBA champions were too strong as an increasingly desperate Houston chased the game.

Kerr later said there had been no hint of panic at halftime as the Warriors trailed.

"I just tried to remind them that at halftime it was an 11-point game, and that's two minutes. If we get a couple of stops and a few threes we're back in it," Kerr said. 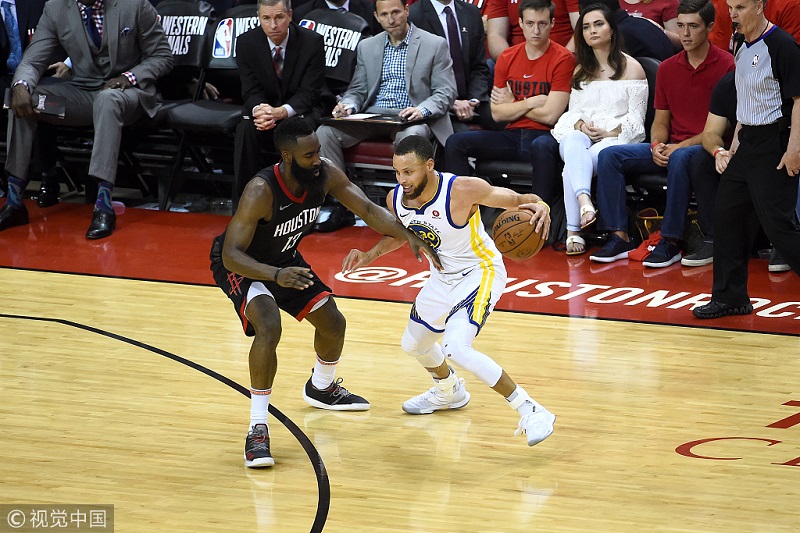 Stephen Curry #30 of the Golden State Warriors handles the ball against the Houston Rockets in Game Seven of the Western Conference Finals during the 2018 NBA Playoffs on May 28, 2018 at the Toyota Center in Houston, Texas.  (Photo: VCG)