Stephen Curry draine nine three-pointers on the way to 36 points Tuesday to propel the Golden State Warriors to a 116-94 victory over the Portland Trail Blazers in game one of the NBA Western Conference finals. 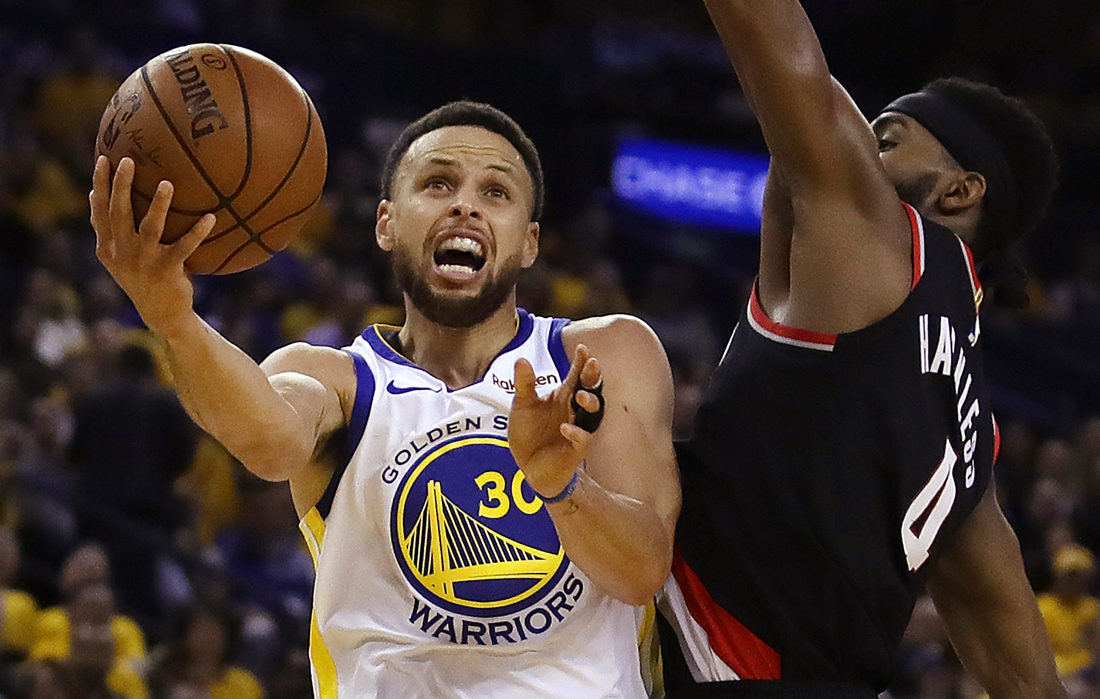 Curry added seven assists and six rebounds as the Warriors led all the way over a Trail Blazers team coming off a game-seven victory over Denver in the second round on Sunday.

Klay Thompson added 26 points and provided an imposing defensive presence as the Warriors shrugged off the absence of injured superstar Kevin Durant.

Curry said he just took advantage of what a free-flowing Warriors offense gave him.

It was a nice flow," Curry said. "It just puts so much pressure on the defense.

"You can't key it on one guy and even if you try to somebody else is going to be open."

The Trail Blazers connected on only 36.1 percent of their shots from the field, making just seven of 28 three-point attempts as the Warriors drained 17 from beyond the arc.

CJ McCollum, who starred as Lillard struggled in game seven against the Nuggets, scored 17 points on seven-of-19 shooting.

"The schedule favored us," acknowledged Golden State coach Steve Kerr, whose Warriors polished off the Houston Rockets on Friday.

"I thought we took advantage of the situation and got off to a good start."

The Warriors pushed their lead to 10 in the second quarter before Portland put together a run that trimmed the deficit to 48-45.

Curry answered with a pair of late three-pointers -- abetted by a Lillard turnover -- to send the Warriors to the locker-room leading 54-45.

The Trail Blazers made another push in the third period, cutting a 17-point deficit to six.

Rodney Hood and Seth Curry both had three-pointers in the Blazers' 11-4 scoring run to end the quarter, but those were the only points of the night for the younger Curry brother -- a Portland reserve -- as the game marked the first time siblings have met in an NBA conference final.

The Warriors reserves opened strong in the fourth quarter to rebuild the cushion in a stretch that Kerr called key.

"Great job by our bench," Kerr said. "If we can buy some time for our starters to rest and even extend the lead, that's a huge deal for us."

Despite their shooting woes, the Trail Blazers managed to stay in touch much of the night thanks to making 27 of 31 free throws and out-rebounding the Warriors 47-42.

But their 21 turnovers led to 31 Warriors points -- a gift no team can afford to give Golden State.

"You can't allow that," said Lillard, who admitted it was hard to come back from the emotional high of beating the Nuggets in Denver.

"I thought our minds were right. We came into the game ready," he said. "But they're a team that can go on runs, they make shots and the game can get away."

In particular, Lillard said, the Blazers need to make things more difficult for Curry, who had open look after open look.

"That was poor execution defensively on our part," Lillard said. "Having our bigs back that far, we've got to bring our guys up and run them off the line."

The Warriors will try to double their advantage in the best-of-seven series when they host game two on Thursday. They are again expected to be without two-time NBA Finals MVP Durant, who has a right calf strain.