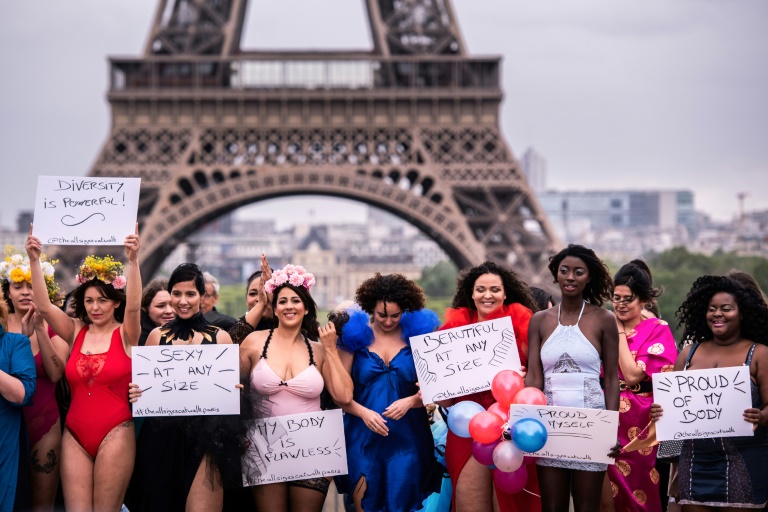 Plus size models and "everyday women" took part in the second edition of the "body positive" show. (Photo: AFP)

Dozens of curvy women staged a fashion show near the Eiffel Tower Sunday, braving chilly rain in skimpy outfits to defy fashion diktats with the simple slogan: "My body is beautiful."

Transparent nightgowns, stockings and lingerie were out in full force along with white-winged models gently mocking US underwear Victoria's Secret to the delight of Parisians and tourists who snapped away with mobile phones and cameras.

Plus size models and "everyday women" took part in the second edition of the "body positive" show, inspired by a movement launched in countries such as Britain and the United States.

Organiser Georgia Stein told AFP her goal was "to represent the majority of women, show they are beautiful despite their 'faults' which are in fact not faults because they are completely natural, like tummies, cellulite or stretchmarks".

The message was underscored by signs in English that read "My body is beautiful" or "Your beauty through your diversity".

Stein, 32, said she wanted to make a difference for "women who don't feel good about themselves and fall into depression as a result".

"In France we lag far behind on the subject," she added in reference to fashion for larger women.

"We don't see any diversity in advertising campaigns or on catwalks. The market for larger sizes is minimal."

"Finding something trendy at a good price is almost impossible. We have to fall back on things with little flowers, outfits that are pretty out of date," she said.

"Finding sexy lingerie if you are curvy, with good support, is complicated. We are doing this so that the fashion world gets going," she added.

The city of Paris in February organised a campaign against fat shaming during the latest fashion week, but the message had trouble being heard. Fashion houses contacted by AFP preferred not to comment publicly.

Karl Lagerfeld, the late designer known for speaking his mind, once said that "no one wants to see curvy women" on catwalks.

Stein noted there were fewer plus sized women in France than in Britain or the US.

"In the United States, they are who they are, a woman size 50 will wear a short, tight dress with a plunging neckline or heels.

"In France, we are more likely to hide that of which we have too much or not enough."

"Ladies, don't forget your wings," Stein called out as she adjusted a pink puff on the arm of a shiny-lipped model wearing a fuchsia nightgown in a cafe north of Paris ahead of the show.

Stein herself was wearing a lacy white slip and makeup but all were covered with blankets as they headed to a bus that took them to the Trocadero plaza where the show had the Eiffel Tower as background.

She said that when staff at Victoria's Secret were asked why there was not more diversity among their models -- who are sometimes called angels -- they had replied "because we sell fantasy".

"They were hit by a huge boycott on social media," Stein said. "With the wings we wanted to send a little wink, to say we too are angels who sell fantasies."